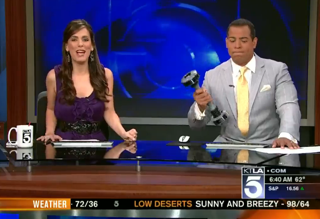 The Shake Weight is a phallic exercise object that demands of its users vertical shaking in order to strengthen arm muscle. Using it looks very much like a sex act. Given these two facts, the good folks at KTLA Los Angeles decided the item merited its own segment, where the anchors described their “small white ones,” “big black ones,” and the “technique” that makes size differences irrelevant.

It’s almost incredible the number of very obvious penis jokes this team packed into one four-minute segment. It begins with the anchors asking the on-location reporter at the Shake-Weight exercise classes with what speed they should be, erm, stimulating their Shake Weights. “You know how you’re doing by feeling the burn,” she wryly replied, and couldn’t help but laugh at the suggestion that “cool-down spray” is meant to come out of the top. Meanwhile, a third anchor interjects: “I’ve got a small white one; does that make a difference?”

Somewhere in the midst of this is an actual personal trainer that seems to believe the Shake Weight has merits outside of crude punchlines, though none of the anchors appear too interested in her advice, other than to keep the item “six inches away from the face,” just in case it pops. Cutting back to the studio, one anchor expresses concern with how much enjoyment his colleague is getting out of the exercise, only to be accused of doing the workout “without the Shake-Weight for years.” He didn’t deny it. “Who hasn’t?”

Watch the (almost NSFW) video via KTLA below: