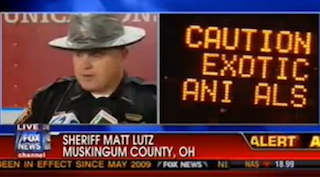 It’s rare that, in the fine state of Ohio, a press conference with a sheriff can be delayed because “a lion and grizzly bear are being surrounded and contained at a nearby property.” Today, however, is an unusual day in the Buckeye State. Sometime yesterday, a number of exotic animals from the Muskingum County Animal Farm, a private facility that specialized in all species of wolves, bears, and all species of wild cats (including lions and tigers), either escaped or were released into the surrounding area. This morning, local sheriff Matt Lutz gave a truly surreal press conference in which he explained what it’s been like for his police department to take on 300 pound bengal tigers.

RELATED: Lions, Tigers And Bears Escape From Ohio Animal Preserve…And Are Still On The Loose

The first question Lutz received was why so many of the animals had been killed instead of tranquilized. He explained that, for a while, they didn’t have tranquilizers on hand. More importantly, his first priority was to protect the human population of the area.

“We are not talking about your normal, everyday house cat or dog. These are 300 pound bengal tigers we had to put down. When we got here, obviously public safety was my number one concern. I gave the order on the way here that, if animals look like they were going out, they went down. We could not have animals running loose in this county. We were not going to have that. Once we got here, realized the severity of the situation, we at that point started running into a problem with darkness. We again, we’re not going to have animals running loose on this farm at night. We can document numerous animals that got over the fence, were out in the wooded areas outside the property that we have had to put down. We had officers down on the interstate that were preventing animals from crossing the interstate into our subdivisions and community.”

The whole thing is truly bizarre. Four whole school districts have been closed to keep the children inside and there are theories that Terry Thompson, the owner of the farm, may have released the animals on purpose, shortly before taking his own life.

Perhaps the most striking image of the report was shots of a highway sign, warning Ohio drivers to stay inside their vehicles because there are “exotic animals” on the loose. Now that’s something you don’t want to see while on your commute.

Watch video of the press conference from Fox News below: