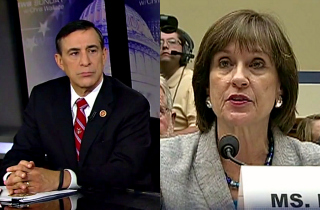 House Oversight Committee Chair Darrell Issa (R-CA) appeared on Fox News Sunday this morning with some “late breaking news”: “[Lois Lerner’s] attorney indicates that she now will testify,” Issa said, referring to the chief witness in his investigation of the IRS’ alleged targeting of conservative groups.

Lerner, who was the Director of the IRS Exempt Organizations division during the supposed targeting, has thus far invoked the Fifth Amendment in front of Issa’s committee. “We believe the evidence we’ve gathered causes her, in her best interest, to be someone who should testify,” Issa said.

Host Chris Wallace even double-checked that Lerner was, definitely, going to testify this Wednesday. “According to her attorney,” Issa replied.

Actually, according to her attorney William Taylor, Lerner has no such plans. “As of now, she intends to continue to assert her Fifth Amendment rights,” Taylor said to POLITICO. “I do not know why Issa said what he said.”

That’s too bad, as Issa had already made fliers:

“Bill Taylor, Ms. Lerner’s attorney, has confirmed in writing that Ms. Lerner is willing to testify and she is now requesting a one week delay for the public hearing. We have informed Mr. Taylor that Ms. Lerner may make her request for a delay on Wednesday when she appears for the hearing.”