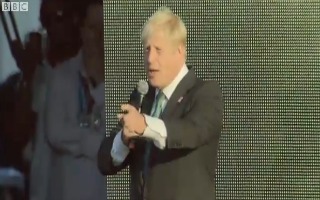 Mitt Romney’s comments to NBC News where he expressed his concern over the security preparations that the U.K. has made ahead of the 2012 Olympic games has not been well received in Great Britain. Today, as London Mayor Boris Johnson closed the 69 day torch relay that brought the Olympic flame to England, he slammed Mitt Romney’s comments before a cheering crowd.

“People are coming from around the world. And they are seeing the greatest city on earth, aren’t they,” Johnson said to a cheering crowd of approximately 60,000 in London’s Hyde Park.

Johnson was met by cheers as he listed the various institutions and venues that were ready to receive the Olympic athletes. “There are going to be more gold medals than you would need to bail out Greece and Spain together,” Johnson continued as he talked up Great Britain’s athletic teams’ prospects.

By the end of the London Mayor’s speech, the crowd began to chant “Boris, Boris.”

Watch the speech below via The BBC: