Look Out, Farmer Joe! Fox Reports That EPA Drones Are Spying On You

Look Out, Farmer Joe! Fox Reports That EPA Drones Are Spying On You 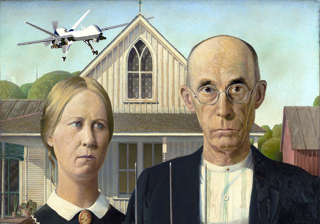 Last week, we reported that several states intend to equip their local police departments with military-grade drone surveillance technology in order to “cut down on manpower” and make law enforcement more cost-effective. This new development will face justifiable resistance in courts and from anyone with an ounce of civil liberties on their mind.

It turns out that, for years, the Environmental Protection Agency — not even remotely a law enforcement agency — has used aerial spy drones to monitor cattle ranchers in Iowa and Nebraska, for the usual “cost-effective” reasons. Their justification for spying is that improper livestock feeding can result in contamination of local watersheds.

– RELATED: VA Governor Wants Police To Use ‘Great’ Surveillance Drones Because ‘We Use Them On The Battlefield’

Nebraska’s congressional delegation, led by Senator Mike Johanns (R-NE), sent a letter to the EPA expressing concerns about the use of drone spies, to which the agency replied that the surveillance is legally allowed and, yup, “cost-effective.”

On Tuesday’s edition of Fox News’ America Live, host Megyn Kelly seemed outraged by the idea of military-style drone planes being used to spy on farmers. “It’s not just al Qaeda anymore. We need to know what the nation’s farmers are doing,” Kelly mocked. “And the EPA stands one-hundred percent behind this.”

Kelly had Fox Business Network anchor Stuart Varney on to discuss the legality of the farm surveillance, and he told her that a constitutional scholar informed him that “If an agency wants to find out what is going on in any given area, for compliance with a law that was passed by Congress, it is constitutionally okay.”

Both Kelly and Varney seemed to find it especially icky once you think about drones in the sense that we use them to kill terrorists and fight battles in the Middle East.

“You’ve got to picture yourself as one of these midwestern farmers,” Kelly said, “because what’s been in the news lately? The fact that President Obama‘s killed more terrorists with drones than any other president. That President Obama has a so-called ‘kill list,’ and that on that ‘kill list’ sometimes civilian casualties go as well because if you’re near an al Qaeda terrorist they assume that — if you’re near an adult male age and a certain community — you also are a terrorist.”

“Even an American [member of] al Qaeda was killed by a drone,” she continued. “So now you’re in the Midwest, and you know you’re not a terrorist, but nonetheless you’ve got to get a little squeamish when you see a drone going overhead.”

Varney agreed: “Yeah. What are you supposed to think? You’re herding cows out there in Nebraska, and you figure there’s a drone going over the top of me? What does that say about the government’s attitude?”

“I predict some clever farmer will have an interesting message for the drone, atop his barn some time soon,” Kelly said.

“Supposing one shot one down,” Varney said. “What would be the repercussions of that?”

“Oh, no,” Kelly replied, “let’s not even put these ideas in people’s heads.”

As you may recall, several weeks ago fellow Fox Newser Judge Andrew Napolitano had made a similar suggestion, saying that shooting down a surveillance drone could make someone a hero.

I am glad that Republican congressmen are outraged over the EPA’s use of drone surveillance, but I hope they extend that same skepticism to local police forces’ use of the same drone technology.

UPDATE: The EPA has officially denied the use of unmanned drones. It turns out that the surveillance program has only used manned aircraft. Fox News has corrected the mistake here.