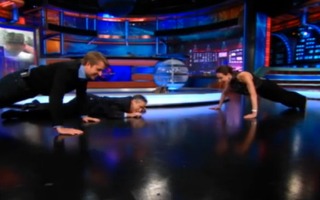 Paula Broadwell, the author of All In: The Education of General David Petraeus who is now making headlines for her affair with the also-married CIA director, visited The Daily Show in January to promote her book.

Broadwell told host Jon Stewart about her own military experience, as well as how she reached out to Petraeus to let him know of her interest in following him to Afghanistan in order to write about him.

“The real controversy here,” said Stewart about her book, “is ‘Is he awesome, or incredibly awesome?”

Stewart — who admitted he’s a bit “scared” of Petraeus — marveled over the man’s ability to withstand so much, including being shot. “He just has a tenacious will,” Broadwell explained, “and is relentless in whatever he does.” When Stewart remarked that Petraeus had asked Broadwell to go on runs with him, she told the host that this was a typical method Petraeus used when getting to know young people. “That was the foundation of our relationship,” she added, describing him as a mentor.

“It’s hard not to imagine him running for president,” Stewart went on to say, eliciting a smile from Broadwell. She admitted that her husband would want her to say Petraeus plans to run because it’d help her sell more books, but that, no, Petraeus didn’t have his eye on the White House. “Sorry!” she told her husband, Scott, who was watching from the audience.

Later, Broadwell and Stewart held a push-up contest to raise money for wounded veterans. To balance the playing field, Stewart invited Scott onstage to do push-ups with him. Hilarity ensued.

Take a look, via Comedy Central. A note that Stewart has a fondness for word “fuck,” just in case you happen to be sensitive to words like “fuck.” So just know that he says “fuck” in this segment. A few times. “Fuck:”