Losing Their Religion: Bill Kristol Says ‘It Won’t Kill The Country If We Raise Taxes On Millionaires’
video

Losing Their Religion: Bill Kristol Says ‘It Won’t Kill The Country If We Raise Taxes On Millionaires’ 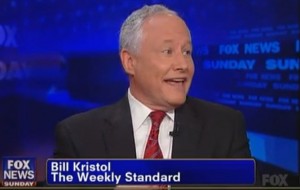 It’s a little bit too early to tell if Republican soul-searching in the wake of Tuesday’s electoral trouncing is the real deal, or just some sort of fever-induced delirium, but conservative pundits have begun to abandon some of their party’s most deeply-held positions. Fox News’ Sean Hannity has become a born-again immigration reformer, and on Sunday morning’s Fox News Sunday, influential Weekly Standard editor William Kristol channeled his inner Obama by telling host Chris Wallace “It won’t kill the country if we raise taxes a little bit on millionaires.”

Kristol began by noting the scary-for-Republicans results of Tuesday’s election, which, no matter how you spin them, show the Grand Old Party appealing to an ever-older, but less grand, slice of the electorate. “Republicans should not kid themselves,” Kristol said. “They lost 25 of 33 Senate seats, and Republicans gained back the two states that were easy to gain back, and no other new states at the presidential level,” and added that “Republicans lost the national House, they kept control of the House because of redistricting and Democratic voters are more concentrated in some districts, it was a bad year, and the youth vote is very worrisome, 60-40.”

He also pointed out the “unfortunate” choice of a Wall Street creature like Mitt Romney as nominee following a Wall Street-created crisis, then went into full-blown ObaMao mode. “It won’t kill the country if we raise taxes a little bit on millionaire. It really won’t, I don’t think. I don’t really understand why Republicans don’t take Obama’s offer,” Kristol said. “Really? The Republican Party is going to fall on its sword to defend a bunch of millionaires, half of whom voted Democratic and half of whom live in Hollywood and are hostile?”

That shot at HollyWeird liberals might help that pill to go down a little easier, but establishment Republicans looking for a way out of the wilderness have their work cut out for them. After four years of convincing their base that mussing even a single hair on a millionaire’s head would crumble our most cherished liberties, it’s unclear if enough political cover exists for the GOP to compromise with President Obama on tax increases, or immigration reform, or anything else. Unlike Hannity, though, Kristol is someone whom Republican leaders pay attention to, so this could be an important high sign that mainstream conservative punditry will have their backs if they act sanely, whether the base is ready for them to or not.