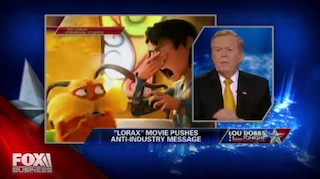 Traditions used to mean something in America. Values used to mean something. And family used to mean something too. However, in recent years, some biased members of the Mainstream Media (by “mainstream media” I, of course, mean “the most popular cable news channels in the country”) are attempting to destroy our national heritage for political reasons. Just a few months ago it was Eric Bolling attacking The Muppets, and now Fox Business Network’s Lou Dobbs is telling us that we can’t let our kids watch The Lorax. When will this War on Children’s Movies end?

On his Tuesday night show, Dobbs trashed the upcoming kids movies The Lorax and The Secret World Of Arrietty, accusing them of being liberal indoctrination that echoes the messages of Occupy Wall Street and President Obama. Dobbs didn’t appear to care that The Lorax is based on a book from 1971 and Arrietty is based on one from 1952 (and also, y’know, a Japanese film). Either that or the Occupy movement is much older than I thought.

Dobbs played clips from the movies and then drew the parallels.

“So, where have we all heard this before? Occupy Wall Street forever trying to pit the makers against the takers and President Obama repeating that everyone should pay their fair share in dozens of speeches since his State of the Union address last month.”

This just makes me sick. What is happening to America? We used to be a country that embraced its children’s entertainment roots. We used to celebrate it! Now my kids can’t even go to school wearing a Kermit shirt without some activist teacher complaining that it’s “insensitive” to kids who come from oil baron families.

When are we going to stop this politically correct nonsense?! We need to stop trying to protect the sensitivity of polluters by destroying the beliefs of the rest of us. America is a children’s movie country! We always have been and we always will be. I don’t care if the Constitution tries to separate theater and state. This is who we are! If people like Bolling and Dobbs don’t like it, well then they can just get out!

Me? I’ll be busy enjoying a kid’s movie.

…but not The Lorax. That crap looks awful.

Watch the clip from Fox Business Network below:

(h/t The Hollywood Reporter via The A.V. Club)