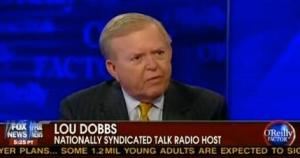 Missing in all the Arizona immigration law debate in the media was one familiar cable news personality – Lou Dobbs.

The former CNN host, who made illegal immigration a major topic on his program for years, weighed in on the topic upon entering Bill O’Reilly‘s No-Spin Zone last night.

O’Reilly set up the interview by jogging the memory of those who may not remember the Lou Dobbs of CNN fame. “Former CNN commentator Lou Dobbs became a very controversial guy with his tough stand against illegal alien intrusion,” he said.

So – what say you, Lou Dobbs? “It’s entirely defensible and it will withstand any challenge by the justice department or by any group that wants to,” he said.

Arizona has every right to take these steps, particularly where this government is quite conscious, this administration, is refusing to enforce immigration law either internally or at the border.

While Dobbs fed the red meat anti-Obama administration policy to O’Reilly’s audience, O’Reilly reminded Dobbs that the border wasn’t any more protected under former Pres. Bush, referencing his “shoot-out” with Karl Rove last week. Dobbs agreed – after all, he became forever connected to immigration policy during the Bush years.

It’s actually surprising Dobbs hasn’t been on Fox News, where he has served as a semi-regular guest since leaving CNN abruptly in November, more since the Arizona immigration story became big news. Dobbs may not be an official Fox News contributor, but his presence on any network when it comes to illegal immigrants lends an immediately recognizable player in the debate for years.

Dobbs has recently been a guest on FNC’s little brother – Fox Business Network – for John Stossel‘s April 29 show on trade (immigration wasn’t really a topic). Still, the fact that Dobbs was a guest on Stossel’s show is a little surprising. It was only six months ago that Dobbs was calling Stossel a “self-important ass.”

Check out the full interview here: