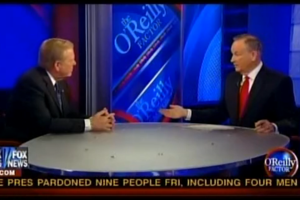 Newly-minted Fox Business Network host Lou Dobbs made his debut as the star of a new O’Reilly Factor segment last night, and it appears that, at least on the immigration issue, the new, improved Dobbs may have mellowed out. In fact, compared to Bill O’Reilly‘s continually high level of outrage against Meg Whitman‘s former illegal immigrant housekepper, Nicki Diaz, Dobbs seemed level-headed to the point of relative apathy.

Not that Dobbs has completely shed the image of anti-illegal immigration crusader that made him such a lightning rod at CNN. In his new segment (titled “Lou’s the Boss”), he made the case for using the law enforcement process to capture and relocate as many of the estimated 12 million illegal immigrants in the country. While O’Reilly pushed, as he has for the past few weeks, vehemently to arrest Diaz and charge her with identity theft for using a false social security number, Dobbs was equally adamant that the law does not allow for that. In fact, he explained, “the appellate courts have held to this point– that just using that social security number is not a crime.”

O’Reilly rebuffed this claim sternly, having difficulty finding the line between using a false social security number and stealing someone’s identity. He also called for Homeland Security Secretary Janet Napolitano to become involved and capture Diaz and as many illegal immigrants as possible, griping that “you cant have 12 million people running around the country with fake social security cards,” and blaming that crisis for much of the economic mess in California. On this point Dobbs also agreed, but in a slightly more mellow fashion. “I would support the Constitution and the laws of the United States” if he were in her shoes, he explained, but “that does not necessarily mean taking [Diaz] in.”

The discussion, the first in a weekly Friday series on Fox News, below: