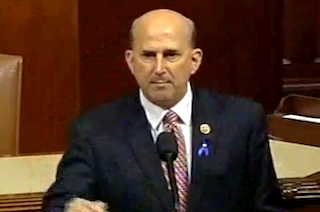 On the House floor on Friday, Texas Representative Louie Gohmert accused various federal agencies of aiding Islamic terrorists organizations such as the Council on American Islamic Relations and the Islamic Society of North America in their attempts to enact Sharia Law.

“We need to address the political correctness that is blinding our agencies and blinding our military of its ability to see who the enemy is, because it’s getting people killed,” Gohmert said. “When you refuse to acknowledge that the Afghans you’re training, may be willing to turn their guns you’re training them on and kill you…until you recognize that and who our enemy is, and that our enemy can be among us, and that our enemy can be in uniforms that we’re supposed to be friendly with, then more Americans are going to be killed needlessly.”

Gohmert accused the Obama administration of changing policy so that the FBI, State Department, and others had to “partner with” CAIR and ISNA, rather than treat mosques as terrorist recruitment centers.

“Any time CAIR says, ‘This offends us,’ the FBI says, ‘Oh, gee, we’d better change it,'” Gohmert claimed. “When you’ve had the Fifth Circuit of the United States Court of Appeals confirm that, yes, the evidence shows that CAIR, Islamic Society of North America—those are front organizations for the Muslim Brotherhood. They want Sharia law to be the law of the land, not our Constitution. And that is what we did not take an oath to allow to happen.”

Gohmert also recalled his theory that the Obama administration and various Congressional offices had been infiltrated by the Muslim Brotherhood, especially by citizens born in the US to parents on VISAs and later radicalized in their homelands—so-called “terror babies“—which he called a “misinterpretation of the Fourteenth Amendment.”

“So [Anwar] al-Awaki’s family was free to come in on a VISA for college, have al-Awlaki, take him back to Yemen, and radicalize him, so that he had America, and as he did lead prayers here on Capitol Hill with congressional Muslim staffers, and also have contact with people in the administration,” Gohmert said. “He was free to come and go and radicalize people in America because he was an American citizen.”

Watch the speech here, via CSPAN: