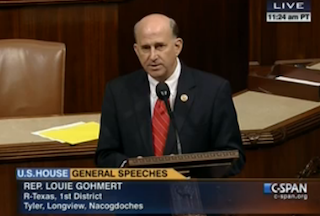 During a nearly 40 minute speech on the floor of the House Thursday, Rep. Louie Gohmert (R-TX) made an unconventional suggestion to atheist Americans. If they want to live in a “free country,” Gohmert said, “it might be a good thing to encourage those who believe in God to keep doing so.”

Gohmert was lamenting that fact that the “mainstream media” has ignored the “widespread systemic violence” and “persecution” against Christians around the world, when he delivered his message to those who want to continue living in freedom in this country.

“No country has ever fallen while it was truly honoring the god of Abraham, Isaac and Jacob. So if you were completely areligious, completely atheistic, but you wanted to have a free country, and you wanted to have it safe and protected, then it would sound like — from historical purposes — that it might be a good thing to encourage those who believe in God to keep doing so. Because when a nation’s leaders honor that God, that nation is protected. It’s only when it turns away that it falls.”

The Huffington Post’s Michael McAuliff spoke to Greg Epstein, a humanist chaplain at Harvard University, who blasted Gohmert’s comments as being highly insensitive to those without religious faith.

“What he said is insulting. It’s really insulting and hurtful,” Epstein said. “People who are not religious or believe differently experience prejudice directly because of his statements.” He added, “If you want to protect your country, you will encourage freedom of thought and freedom of conscience and freedom of expression. If you want to damage your country, you will encourage uniformity of thought; you will be the thought police.”