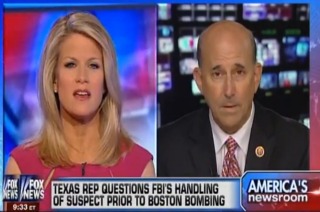 On Thursday, Rep. Louie Gohmert (R-TX) and FBI Director Robert Mueller blew up in an exchange over the Bureau’s investigation of the Boston bombing suspects prior to committing that terrorist attack. That heated exchange prompted Gohmert to appear on Fox News on Friday to further excoriate American investigative agencies for what he characterized as a purge of tactics and materials that have been deemed “offensive to the radical Islamists that want to kill us.”

Mueller insisted that the FBI did investigate the Massachusetts mosque where the Tsarnaev brothers were radicalized.

Gohmert attacked the Obama administration and their investigative agencies for purging from training materials for law enforcement officials anything that “might be offensive to the radical Islamists who want to kill us.” He said this was done at the behest of the Council for American-Islamic Relations (CAIR), which he said has been called a front group for the Muslim Brotherhood.

“I get tired of the FBI and this administration saying, ‘well, look, the Russians should have given us more information,’” he continued. “They didn’t even know the mosque these brothers were attending was started by a terrorist supporter who is in prison for it. It’s shocking.”

Fox News anchor Martha MacCallum asked why, given the revelations surrounding the National Security Agency’s communications monitoring programs, the agencies were unable to uncover the Boston plot before it was executed.

Gohmert replied that intelligence agents have told him that the FBI’s intentional effort to not offend Muslim sensibilities has “blinded us” to the dangers posed by radical Islamists.

“Thank goodness most Muslims love this country, that are here, and they don’t want to destroy it,” Gohmert said. However, he said, the FBI has abandoned the processes that have successfully exposed radicalized Muslims in the past.