Louis C.K. Describes Filming Inside ‘The Belly Of The Beast’ At Fox News For Louie Episode 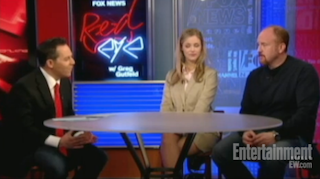 Over at The A.V. Club, they’ve been doing this great series of interviews where showrunners of some of the best comedies currently on TV give detailed episode-by-episode descriptions of their most recent seasons. Previously they’ve talked to Community‘s Dan Harmon and Parks and Recreation‘s Michael Schur. This week they’re talking to Louis C.K. and, in the interview that went up today, C.K. discussed the making of the episode that saw him guesting on Fox News’ Red Eye.

It was a great episode and the discussion of its creation is pretty fascinating. Apparently the story was originally going to be just about C.K. saying something on cable TV that gets him in trouble (perhaps taking inspiration from the whole drunk Sarah Palin tweet ordeal?). However, C.K. the writer had learned during the production of the instantly-famous Dane Cook episode that, when you do a story that really gets inside of an opinion you disagree with, amazing things can happen. So he wrote the episode as is.

LCK: Then we went down the road of who’s gonna play—I think I asked Joy Behar to play the host at one point, and we went out to Anderson Cooper about it. But it actually made it more compelling to me to do it at Fox News. I actually asked our Fox friends to ask Sean Hannity to do it, or Shep Smith was the guy I wanted. But we were told no one was willing to even ask them. The guy at Fox News that was our go-between guy, he said, “You should try this Red Eye guy, because that show is already a little rebellious. They do a lot of goofy stuff and they have lot of comedians on.” I didn’t really want to do it, ’cause I had seen his show and he usually just wears a T-shirt and a jacket and he goes on rants and he’s a bit of a comic. But he had the script, and I called him and said, “Listen, I’m interested in doing this with you because you’re on Fox News, but I have a concern,” and he interrupted me and said, “You don’t want me to be who I am on my show: You want a Fox News guy like Hannity. You want me to play a guy like that.” And I said, “Yes” and he said, “Of course I will. I’d love to do it.”

He was really motivated to be in it and was excited about it. So he put on a suit and tie. He does that sometimes, he fills in for the Fox News shows. So he fucking showed up and did a great, great job. We shot it in the belly of the beast, though. It was really funny to go there, and they were worried about us wandering into the wrong shows. We had a liaison who was really watching us. It was interesting to be there, because Obama was making a speech that day, and he had just finished the speech, and we watched the Fox News machine crank up and respond. They had talking heads—’cause I was watching the feeds and stuff, ’cause I’m fascinated by broadcast television—and I saw feeds of people standing with earpieces waiting to be interviewed. Like a guy standing there in front of whatever in Washington, and they were ready with their response before the speech was finished. And I realized how fast it was, and from being there, if you’re in a place where you have empathy, I thought, “They have a demand.” They don’t have any meaning to the public if they can’t start talking the second he’s done, so they have to throw together their fucking opinions, and then the other side does the same thing. And if anyone would just fucking take four minutes and drink a glass of water, it would tone down the rhetoric, like 60 percent, if they just took five minutes.

AVC: But that would be the end of Fox if they toned down the rhetoric.

LCK: Right—and everybody else, and Rachel Maddow and these people, although she’s pretty damn reasonable. That’s ’cause I agree with her. [Laughs.] But it was intense. But anyway, Greg was great, [actress Liz Holtan] was great.

The whole interview (as well as the ones for Harmon and Schur) is extremely interesting for any fan of television in general and television comedy particularly. Highly, highly recommended. Here’s the first part of four.

And, below, watch a short clip from the scene in question: