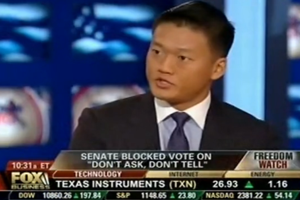 Lt. Dan Choi, the gay rights advocate who, despite being a West Point graduate and fluent in Arabic, was discharged via Don’t Ask, Don’t Tell, made the media rounds this morning to discuss the failure of Congress to turn down the law and why it is so counterproductive. Except this morning, he had to make the case on Judge Andrew Napolitano‘s Freedom Watch, meaning he had to sell that point to libertarians. It was easy: DADT is exorbitantly expensive.

Yes, Freedom Watch is about individual rights, so Judge Napolitano was already convinced by both the human element of the law and the massive government intrusion into government life it represents. Lt. Choi explained in detail what the repercussions of such a law would mean to a soldier: being unable to tell a fellow soldier on the battlefield to send his love to his partner in case of death; being unable to trust anyone you go on the battlefield with at all because, should they have any suspicion that you are gay, your career becomes jeopardized. “Without the truth,” he emphasized, “you have no cohesion.”

But he made one argument that, either because so many gay rights groups are also pro-big government or simply because it hasn’t come up, is a rare one to hear about the policy, and could not have been more apt for the venue: it costs billions of taxpayers’ dollars to maintain.

“It’s cost $1.3 billion, just for the process of kicking people out. In my trial, you had to take four commanders away from their duty in order to spend their whole day just hearing the trial of my truth, whether I’m gay or not. when you talk about individual freedoms and inalienable rights, this is the utmost of rights and responsibilities: that responsibility to have the most stable situation you can have in your home. That is, to have a committed partner, and to be able to trust that person and commit to that person and have that person recognized– Don’t Ask Don’t Tell says that person should not even be recognized, but nonexistent.”

Judge Napolitano added his footnote to Lt. Choi’s comments, ripping into Don’t Ask Don’t Tell– and Congress for not repealing it– hoping that, “one day, sooner or later, Congress we recognize the absurdity of this law, and the cost to human freedom and to the national security of the country.”

The interview from this morning’s Freedom Watch via Fox Business below: