Lt. Dan Choi Weighs In On Consequences For Soldier Who Spoke Out At Ron Paul Rally 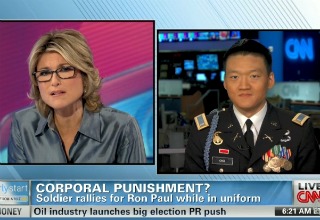 Lt. Dan Choi paid a visit to CNN’s Early Start today to discuss whether the uniformed soldier who recently spoke out on behalf of Ron Paul at a rally for the presidential hopeful will have to face any sort of consequence for his actions.

See, according to a directive set out by the Department of Defense, a member of the armed forces may “attend partisan and nonpartisan political fundraising activities, meetings, rallies, debates, conventions, or activities as a spectator when not in uniform and when no inference or appearance of official sponsorship, approval, or endorsement can reasonably be drawn.” They may not, however, “speak before a partisan political gathering.”

Lt. Choi, whom, you may recall, was discharged from the military under DADT, has experience with this issue. Back in 2010, Choi handcuffed himself to the White House’s North Lawn fence, while in uniform, as a means of protesting DADT. Of course, Choi is quick to point out that he was a civilian at the time of the protest, “and so we have the full right to wear the entire uniform. So they’re not charging me for wearing the uniform, they just didn’t like the fact that I was protesting and practicing my free speech.”

That said, he believes that Corporal Jesse Thorsen‘s case is different because he is currently in the reserves. But what happens to Thorsen is part of a discussion, he says, that is only going to become more necessary for us to have:

You have to realize that these soldiers, these veterans, fought to protect the constitution. And when they come back home, whether they’re civilians or in the military, the constitution still protects them. I can wear this uniform because I’m a civilian, I’m proud of my service, my entire service, so my entire uniform is what you see and I’m very proud of that.

So, when we talk about moral issues — Don’t Ask, Don’t Tell or drones or endless war, Bradley Manning, or any sort of issues that really do affect our national dialogue — I think veterans should stand up and be very proud of their service to talk about it.

So, Ashleigh Banfield wanted to know, do service members get briefed on what they’re allowed to do when in uniform? They do indeed, Choi shared. And this is why one must be ready to face the consequences of one’s choices.