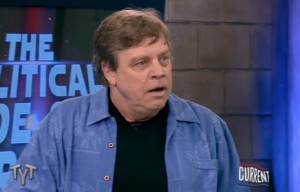 If you felt a disturbance in The Force Wednesday night at around 7:45, it wasn’t just the Hot Pockets you wolfed down for lunch, but rather, an appearance by none other than Sushi Girl star Mark Hamill on Current TV’s The Young Turks. The former Luke Skywalker may have disappointed some of his conservative fans by lighting up Republican presidential candidate Mitt Romney like the fattest womp rat in Beggar’s Canyon, taking the former Massachusetts Governor to task for his debate treachery, revisiting the bullying scandal that surfaced months ago, and generally declaring that Romney is not the ‘Droid™ we’re looking for.

As host Cenk Uygur explained, Hamill stirred up a veritable gundark’s nest when he tweeted his disapproval of Romney’s truth-challenged debate performance. Hamill seemed to have weathered the backlash in stride, and pointed out a flaw in the presidential debates that both sides ought to be able to agree upon.

“I debated in high school,” Hamill said. “If you told things that weren’t true or just made things out of whole cloth, you were penalized. It’s too bad they don’t apply the same standards to presidential candidates as they do to high school students.”

The result of our post-truth political media, Hamill warns, is that “low-information voters” who are only now tuning in for the debates only see a guy who really looks and sounds the part. “I would cast this guy as the president in a heartbeat,” Hamill said, “but I just cannot believe a word he says.”

Hamill then gave, as an example, Romney’s claim that he didn’t remember the bullying incident that The Washington Post reported on in May, even as he made no attempt to deny it. “If you or I had wrestled a student, in high school, to the ground and given him a forced haircut, kicking and screaming and crying, would you remember that? I know I would!”

Cenk and Hamill also engaged in a parlor game in which they assigned Star Wars characters to various political figures. Hamill, though, refused to go along with the conventional wisdom on former Vice President Dick Cheney. “I don’t think it’s fair to compare Dick Cheney to Vader,” he said. “It’s unfair to Vader,” explaining that at least Darth Vader eventually redeemed himself.

Hamill also decided that President Obama was “so wise” that maybe he was a cross between Obi-Wan Kenobi and Yoda, before settling on Obi-Wan, and cast Vice President Joe Biden as Uncle Owen (Cenk, in a career low point, had to be reminded who the character was). Cenk offered Chewbacca the Wookie for Biden, and Luke Skywalker for the President. They didn’t get to the Romney/Ryan ticket, but I would submit that if Mitt Romney skipped breakfast and TV makeup, he’d be a dead ringer for Grand Moff Tarkin, and for Paul Ryan, based on physical resemblance alone, can you do better than this? 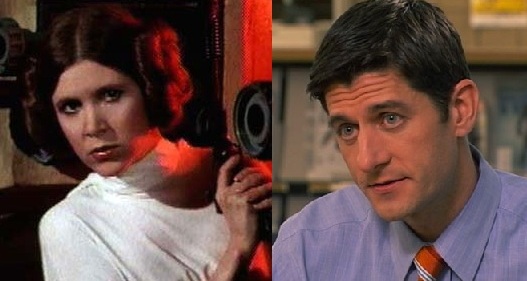 There are an awful lot of conservative Star Wars fans who might be disappointed by this, but they’re also kinda used to it. The disappointment a liberal feels when finding out that the guy from Firefly and Chuck is a right-wing nut job plays out twentyfold for conservatives, but they’ll get through it. Political leanings might keep me from checking out an on-the-bubble show like Boss, but I still watch Firefly reruns.

The silver lining is that Hamill did manage several shouts-out to conservative media whinedogs Newsbusters, which should make their day.

The trailer for Hamill’s new film Sushi Girl, by the way, looks pretty awesome, and appears to star Hamill as an evil Paul Williams.

Here’s Hamill’s TYT appearance, which cost the lives of countless Bothan spies to bring you, in two parts. Part One: