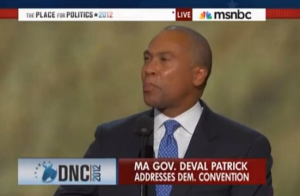 One the most rousing speeches from the Democratic National Convention Tuesday night came from the man who succeeded Mitt Romney as the governor of Massachusetts, Deval Patrick. Citing a laundry list of what he deemed President Barack Obama‘s best accomplishments, Patrick also took on Romney’s tenure as governor.

“Mitt Romney talks a lot about all the things he’s fixed,” Patrick said. “I can tell you that Massachusetts wasn’t one of them.”

“He’s a fine fellow and a great salesman, but as governor, he was more interested in having the job than doing it,” he said, adding that Massachusetts was 47th in the nation in job creation when Romney left office.

Focusing on an aspect of Romney’s political career that Romney himself hasn’t much discussed, Patrick sought to paint a bleak picture of condition Romney left the state in:

He cut education deeper than anywhere else in America. Roads and bridges were crumbling. Business taxes were up and business confidence was down.

Like many of the other speakers tonight, Patrick also pointed to Obama’s record on social issues, namely same-sex marriage and women’s health/abortion (both of which clearly resonated with the audience).

Making the case for the president’s reelection, Patrick also took a direct hits at Republicans’ campaigning and what he deemed to be their obstructionism. “I, for one, will not stand by and let [Obama] be bullied out of office, and neither should you,” Patrick told the crowd.

He urged, “It’s time for the Democrats to grow a back bone and stand up for what we believe in.”

(The takeaway for some: cue speculation about Patrick’s future plans on the national stage.)

Patrick’s speech in full, below — courtesy of MSNBC: