Mad Men Recap: I Had All Of The Nightmares Last Night 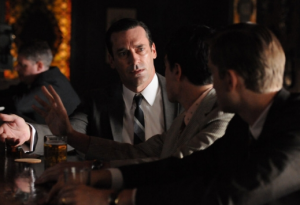 I’ve been unsettled watching Mad Men before, but I don’t know if I’ve ever been as overtly disturbed as I was watching last night’s episode. Set against the backdrop of the Chicago race riots and the ghoulish story of Richard Speck, who murdered eight nurses in a single night in 1966 (don’t Google him before bed — just some friendly advice from someone who should have known better), this episode was full of glimpses into the darkest corners of our favorite characters’ minds, to really disconcerting effect. (There’s also a brief subplot that reveals that Michael Ginsburg has begun to annoy Don exactly as much as you would think, but he has Don’s poetic sensibility when it comes to advertising. That’s all the time I can really spend on it this week, because there was so much other stuff going on!)

The most dismaying of these came from Don, who is off his game with the flu for the whole episode. While he’s hacking and gagging in the elevator with Megan, he runs into Andrea, a freelancer he used to sleep with in his hedonistic Divorced-Don days. Megan is understandably unhappy about this, referring later to Don’s “careless appetite” for women, and seeing the familiar way Andrea speaks to Don doesn’t help. They have a rather open and mature conversation about it in the office kitchen, however, and Don assures her “I married you. And I’m going to be with you until I die. Which could be this afternoon.” He goes home early, and Andrea appears at his apartment. Now, I don’t know if everyone is on the same page as I am here, but I am positive that the rest of this plotline is a fever dream, for a few reasons: there’s something just off enough about Andrea’s behavior that it seems like a projection of a human being rather than a real one, and she’s able to get into the apartment too easily (she shows up once at Don’s door, and then agan in his bedroom). She speaks to him not like an old conquest, but the way I imagine Don speaking to himself, with loathing and disgust. After they sleep together, when Don tells her that’s the last time, she says “You loved it. And you’ll love it again, because you’re a sick, sick—” she doesn’t get to finish this sentence because Don wraps his hands around her throat, keeps them there until she stops breathing, and then shoves her halfway under the bed before passing out.

There’s just no way that it’s real. It’s too sensational for the show, and it’s a better story if this is all borne out of Don’s mind. He has a second chance to be a better husband with Megan, and he really wants to be, but his overwhelming need to dominate and control women, and his “careless appetite” for sexual gratification make it difficult to be the partner he wants to be. And because he’s so rarely capable of self-examination, and so much of his identity as Don Draper is an empty facade, it’s extraordinarily difficult to do the emotional work required to stop using and disposing of women — those urges will always come back to haunt him. That, I think, is why Andrea is only half-hidden beneath the bed, before she disappears entirely, because her only real scene in that episode was the one in the elevator. That’s my story and I’m sticking to it!

In other news, Joan’s husband is back from the war, and is thrilled to see her and his son. Well, “his son.” Their reunion is soured almost immediately with the revelation that he’s returning to Vietnam for a year, and not because he was ordered — he volunteered. It’s clear that being in the army has given him the sense of purpose and importance that he felt he was lacking when he was doing things like failing surgical tests and raping Joan in Don’s office. He also offers a comment on the riots, saying “Plenty of Negroes in Saigon, and they’re all plenty brave,” and I just love this show so so so much for complicating the civil rights issue the way that they have, by having some of the more odious characters on the show (like Dr. Harris and Pete Campbell) express the most progressive views. Joan flips out at the news that her husband will be gone for another year, then takes a night to herself and delivers an amazing speech at the breakfast table: she tells him “I want you to go, and never come back.” When he protests that the army makes him feel like a good man, she says “You’re not a good man. You never were, even before we were married, and you know what I’m talking about.” Smell you later, evil doctor husband! I’m betting the next time we hear about him he’s been killed/disfigured/gone native like Mr. Kurtz in Heart of Darkness.

Peggy, when not accepting $400 bribes from Roger to put together a Mohawk campaign that he forgot about (boy, this is the second time this season that Roger has had to bribe people to get them to cover for him. If I didn’t know better I’d say this is foreshadowing his death — how else to explain all the signifiers of his uselessness?), is befriending Don’s new secretary Dawn. She finds her sleeping in Don’s office, too afraid to return home since there’s some kind of echo of the Chicago riots happening in Bed-Stuy that night. Peggy offers to let her stay at her place, and a very weird scene ensues, in which Peggy draws all manner of inappropriate parallels between being the first female copywriter and being the first black secretary at SCDP, and gets way, way too drunk. I feel like the scene direction was almost suggesting some kind of sexual attraction on Peggy’s part? There was certainly something weird going on, with the sheen of sweat on her face and all of her fidgeting around. Of course, it could have just been Peggy’s fear that Dawn might steal something, which she makes clumsily obvious when she stands in the living room for about an hour, clearly debating whether or not to leave her pocketbook out on the coffee table with all of Roger’s money in it when Dawn will be sleeping on the couch. Oh, Peggy. But see what I mean with the unlikable progressive characters and the likable ones who aren’t getting it? This show is so good!

Finally, poor Sally Draper is stuck with Henry’s mother while Mr. and Mrs. Francis are out of town, and Grandma Pauline is obsessed with the Chicago nurse murders (I hope she lived long enough for the invention of the Investigation Discovery channel). Sally is wandering around the house with unbrushed hair, picking up bits and pieces of the story and finally stealing a newspaper and getting thoroughly freaked out. She goes to Grandma Pauline for comfort, who tells her Speck murdered those girls “Probably because he hates his mother” and that they let him into the house because “they probably thought ‘He can’t rape nine of us.'”

When Sally wonders how she’ll ever fall asleep, Pauline bites a sleeping pill in half, gives it to her and they both slip into comas that Henry and Betty can’t rouse them from when they return — in fact, they can’t find Sally at all, because she is curled up beneath the couch on which Grandma Pauline is snoring. I worry about Sally so, so much. “He Hit Me (It Felt Like A Kiss),” which, one might remember, was produced under the guidance of notable crazy person Phil Spector, plays us out to the credits. Man, Mad Men is not playing around about the late sixties.