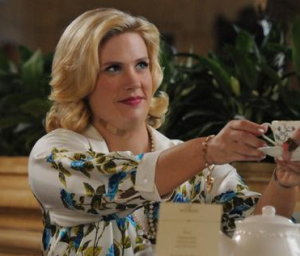 This episode was very funny, despite many of these characters feeling so melancholy in the midst of all this late sixties change. At Sterling Cooper Draper Pryce, there is a new secretary — one of the black women who answered SCDP’s fake wanted ad. She’s very pretty, and amiable even in the face of Harry Crane’s persistent awkwardness and Roger Sterling’s casual racism. Roger’s prejudice is all he has right now, as the bigwigs at returning client Mohawk Airlines are content to drink with him, but would prefer to do business with Pete. Pete celebrates this all over the office with a dramatic model airplane unveiling and bottle of champagne. Roger is furious, but what can he do? Pete is bringing in all the business. SCDP is on its way up in this episode, reflected also in the decision to hire a new copywriter. Peggy is in charge of finding him (it has to be a man, they specify), and if you thought that Stan and Joey were pieces of work, they are really nothing compared to Michael Ginsburg, a young Noo Yawk Jewish man who shows up to the interview in a plaid sportcoat and tries to spin his insults to Peggy as bravery. He is sincere about wanting to be part of the SCDP team when he interviews with Don, however, and welcomed aboard (prompting, of course, more casually racist jokes from Roger).

In addition to this workplace drama, Don and Harry are sent on a fools’ errand to try to convince The Rolling Stones to do an ad for Heinz ketchup (this harebrained scheme was hatched by the client). Harry cheerfully shares a joint with some children and is spirited away into a dressing room to speak with the Stones, while Don has a careful conversation with one of the young groupies (played by Lie To Me’s Hayley McFarland, who I have always really liked and who is great here). He asks her about the Stones — “What do you feel when you hear them?” She tells him that “you” (meaning, I think, Don and all the other members of her parents’ generation) don’t want kids her age to have any fun, and Don replies “We’re worried about you,” clearly with his own daughter in mind. In these scenes Don looks unusually square and old: his suit and carefully combed hair look retro and outdated contrasted with the shaggy manes, T-shirts and minidresses that surround him. Eventually Harry reemerges, reveals that he was tricked into talking to a group of musicians who definitely weren’t The Rolling Stones, and eats what I think are twenty White Castle sliders in Don’s car before taking his leave. “Everyone’s having fun, everyone’s on drugs!” he complains. The latter half of the sixties really doesn’t belong to the grown ups’ generation anymore.

The most poignant part of the episode was the return of Betty, who has put on a few pounds since we saw her last. It’s an excellent use of January Jones’s pregnancy or a fat suit or both, and leads to all kinds of psychological trauma, like her mother-in-law’s impromptu Anorexia 101 course (given after she interrupts Betty watching TV and eating Bugles in her housecoat, which, LOL) that compels Betty to go to the doctor in search of diet pills. Her doctor insists on checking her out, though, and finds a lump that needs testing. Betty is terrified, and can’t reach Henry, so she calls Don and asks him to “say the thing [he] always says.” Don, who lost his first and only true friend to cancer last season, tells her “everything is going to be all right,” but you can see depression settling into his features even as he says the words. He spends most of the episode fretting about the outcome, to Roger (“Well, that would solve everything”) and to Megan, who starts to promise to take in his kids only to be shut down immediately by Don. In his later conversation with Roger it seems he doesn’t think that Megan would be able to fill the void Betty’s passing would leave in his children’s lives. He’s terrified that they might grow up without their real mother, like he did. That he chooses to share this with Roger at all is interesting. Is the looseness of the decade opening him up?

Poor, poor Betty is so scared in this episode. She meets an old acquaintance at the doctor’s office who is dying from cancer, and who told her husband he ought to tell the kids she was hit by a car in lieu of the truth. A palm reader approaches them while they are having lunch, and when she looks at Betty’s tea leaves and pronounces her a “great soul” she starts to cry. Betty seems to regret the distance she has put between herself and her children, as well as Henry and Don. At the end of the episode she gets a call with her results, and she looks so unhappy when she tells Henry that the lump was benign, that it almost seems like she’s lying. Don calls to check in and Henry relays the good news, looking perturbed that Betty filled him in at all. The episode ends with Betty eating ice cream sundaes with Sally, who doesn’t finish hers and abandons her mother at the table to watch TV. Betty slides her empty ice cream dish aside and places Sally’s in front of her, looking positively devastated that she’s going to live after all. The episode fades out with a snippet of “16 Going On 17” from The Sound Of Music, throwing Betty’s dissatisfaction and helplessness into sharp relief:

I’ll be back next Monday to talk about episode three! Mad Men airs at 10/9 Central on AMC.