Mad Men Recap: The End Of Pete Campbell As We Know Him 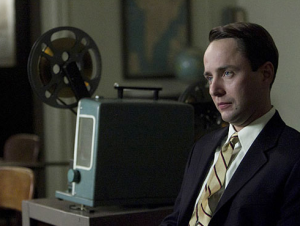 If there was any lingering doubt that the late sixties were not going to be kind to this cast of characters, the most recent episode of Mad Men ought to put that to rest. It is getting grim out there!

Let’s start with the least complicated stuff first (although it’s Mad Men, so really, it’s all complicated). Ken Cosgrove gets more screen time than he did in all of Season Four, when we learn that he’s still writing stories under the nom de plume “Ben Hargrove.” This makes him the second character, after Don, to take on a new name, but he doesn’t want anyone at SCDP to find out for fear that they will think his attention is divided. He confides this to Peggy, who tells him she’ll keep his secret, but his wife Alex Mack (just kidding, his wife Bianca Stratford, just kidding, his wife Cynthia Cosgrove) spills the beans at a dinner party at Pete and Trudy’s place, leading to a lecture from Roger in the office after the news reaches him. He tells Ken “As a fellow unappreciated author and a friend, when this job is good it satisfies every need. Believe me. I remember.” It’s so gratifying that the show continues to mine Sterling’s Gold for jokes. Ken tells Roger and Peggy that he’ll cut it out with the writing, but the end of the episode shows him scribbling in a notebook in bed while his wife sleeps, oblivious.

RELATED: Mad Men Recap: I Had All Of The Nightmares Last Night

Lane Pryce goes to watch the World Cup finals with his wife and a bunch of fellow Britons, and the melee that ensues wouldn’t look out of place in a Williamsburg bar today. He chats with a fellow expat, Edwin Baker, who happens to be an SVP for Jaguar, and offers to set up a meeting. Lane takes this proposal to the partners, and Pete is clearly put out seeing Lane bring in a car account, which would be a huge cash cow for the company but would eclipse his Mohawk contribution. Roger gives Lane some tips on wooing a client: it’s like going on a date, discussing a personal foible helps to foster a bond, and so on. It’s a reminder that he is very good at selling people on themselves — when he feels like working, that is. Lane’s execution of these tactics isn’t very good, so Don, Roger and Pete offer to take the Englishman out for round two and let Lane off the hook. This takeover is handled very nicely in Lane’s office, but the veneer of respect disappears immediately afterword, as Pete sneers to Roger “Lane couldn’t close a car door.”

At this second dinner, Don, Roger, and Pete trade their lobster bibs for condoms (I…hope?) when they take Baker to an admittedly very classy brothel for some fun. Everyone disappears with a girl except Don, who keeps drinking at the bar and chatting with the madam. It’s somewhat unclear if he has totally changed and doesn’t want to cheat on Megan, or if the memory of growing up in a “whorehouse,” as he puts it, is killing the mood for him. Either way, he does some silent judging of Pete in the cab on the way home, who is furious that Don Draper, of all people, would look askance at a little bit of fun with a prostitute who laughably refers to him as her “king.” He’s not judging Roger, Pete whines.

“Roger is miserable,” Don snaps. “I didn’t think you were. You don’t get another chance at what you have.” Pete snorts at this thought coming from someone on his second marriage, and Don says “If I’d met her first, I’d have known not to throw it away.” Whoa! This is a new Don, who wears hideous plaid sportcoats (oh hi, late sixties! Thanks for RUINING EVERYTHING), who seems nostalgic for life in the suburbs at Pete and Trudy’s party, and who asks Megan to make a baby with him in the car on the way home. “That’s impossible,” she says, but doesn’t elaborate. Is it possible that Megan can’t have children? I almost hope that’s true, given that Don already has three kids he ignores half the time, and a new baby might be the last straw for Sally before she goes full Manson family on everyone.

Pete’s suffering isn’t over in this episode. First, he’s emasculated by Don, who easily fixes a faucet that Pete had unsuccessfully patched up after it starts to spray water everywhere during the dinner party. He flirts with a high school senior in driving class (he grew up in Manhattan, but he needs to know how to drive now that he’s in the ‘burbs) and almost charms her into a date, before a boy her own age (his name is Hanson, but his nickname is “Handsome,” which should tell you all you need to know) swoops in and steals her attention from Pete. Before you know it, he has his hand up her skirt while they watch footage of car accidents in the classroom and Pete glowers in the corner. Sexy!

The climax of the episode, however, comes when Lane storms into a partner’s meeting demanding to know how they lost the Jaguar account. Apparently Mr. Baker came home to his wife with chewing gum entangled in his pubic hair, and blamed SCDP for the whole prostituting adventure. Lane can’t believe that the staid Baker he had dinner with is the same man who would request hookers, but he didn’t ask Lane, Pete tells him, because he thinks Lane is gay.

That does it. Lane takes his jacket off, rolls up his sleeves, and challenges Pete to a fistfight. Pete huffs and puffs and then rolls up his own sleeves. Don, hilariously, draws the conference room blinds. Pete gets a few licks in, but Lane ultimately kicks the crap out of him, and now Mad Men fans can all stop wondering when Pete Campbell will get punched in the face. “Consider that my last piece of advice,” Lane gasps, and storms out. A little while later, Joan sweetly cleans him up in his office, giving him an echo of the pep talk he gave her in the season premiere, and when he kisses her in a moment of desperation she gets up, opens the office door, and makes it clear she’s willing to forget about it if he is. The person who can’t forget about any of it is Pete, who boards the elevator with Don, devastated that no one came to his aid. “I have nothing, Don,” he says, his voice thick with tears. As he sits in the dark high school classroom later that day, watching Hanson feel up the girl he was after, the dripping faucet comes back, a reminder that despite his wife, child, and career, Pete Campbell will probably never be happy. He looks like he wants to die, and I worry that this season he really might.