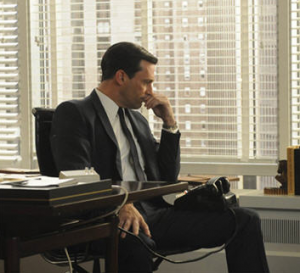 Last night’s episode of Mad Men saw many of the characters, especially the women, trying on new roles, attempting to fit into them even if they were too baggy or burdensome. It’s a common theme on the show, but it was explored in particular depth in this episode, titled “Lazy Lazarus.”

Megan’s new role this season is “Mrs. Draper” — a member of the creative department at Sterling Cooper Draper Price, wife to the boss and mother figure for his children. In this episode, she succeeds in all departments: she is still very fond of Sally and Bobby and they of her, and she has an idea while making them spaghetti that saves the Heinz campaign (which she coaxes Don into delivering, masterfully, at a dinner where they were originally going to be fired). It’s a riff on the theme that “some things never change.” In the context of the ad, this means that little kids in space suits will still be eating baked beans, just like their caveman ancestors did. The history is a little muddy, but the client loves it, and Don loves watching his wife succeed. Megan is the only person who seems rather ambivalent about her success, making the suspicion that she is hiding some kind of secret even stronger. At an American Cancer Society dinner honoring Don for his bridge-burning letter to Lucky Strike, Megan’s father, who is visiting, chides her for giving up on her “dream” by getting married, though he isn’t specific about what that dream might be. Is my theory correct, and Megan can’t have children after all? Is she, at the urging of her Marxist father, supposed to come to America to dismantle capitalism from the inside and instead got a job in advertising?

At work, things are well for Peggy: she’s getting along with Stan and Ginsberg, and finding a new role for herself as a mentor to Megan. She is also is getting more serious with her reporter boyfriend Abe, and when he asks her to go to a romantic dinner at Minetta Tavern in the middle of the week, Joan guesses that he wants to propose. What he offers instead is for he and Peggy to live together, an idea toward which she seems to have lukewarm feelings. She ultimately accepts, but when she reveals her decision to Joan (who seems genuinely proud of her, and calls the decision “romantic”) she acts preemptively defensive. When she tells her mother over dinner it’s even worse, with her mother taking back the cake she brought over, since she doesn’t want it to be eaten by people “living in SIN,” and declaring that Abe is just practicing playing house with Peggy until he is ready to settle down and have a real family.

Sally Draper has to come stay with her father in the city after scary Grandma Pauline tripped over a phone card in the Haunted Francsion (get it?), which Sally had stretched across the hallway in order to have privacy while she talked to GLENN!!!!!! Oh, creepy Glenn. So glad that he and Sally are staying in touch. She and Bobby get to stay in Don and Megan’s sixties pad and Sally even scores an invitation to the American Cancer Society dinner. She goes shopping for the occasion and gets a cute little mod silver dress, but when she puts a bit of makeup on and pairs the dress with white boots Don has a heart attack (maybe at the thought of what men like him have done to girls just a bit older than Sally) and makes her take off the face paint and boots. Nonetheless, Sally is clearly enjoying trying out Grownup World, and sees Megan as a role model. Roger Sterling ends up claiming her as his date at the dinner, and charms Sally with jokes (“I got you a Shirley Temple. It’s time to start tapering off”), but her opinion of him quickly goes sour when she catches him and Megan’s mom in an, uh, adult tableau in a room next to the ballroom where dinner is taking place. Disturbed by the scene, she returns to the table and sits there quietly until she gets back to the apartment, where she calls Glenn.

“Dirty,” she replies. I went back and forth on this moment at the end of the episode — was it too heavy-handed? I think what saved it is the immediate cut to a black screen, almost before we’re able to process the word. It felt like a bit of a joke instead of a Dramatic Moment, and I liked that.

Roger and Don, two of the older characters on the show, are not immune to the changes felt in the episode, the way peoples’ interactions shift and bend under new pressures. Roger has been annoying people non-stop with his need to talk about his enlightening LSD trip we saw last week. He meets with his ex, Mona, to ask her help in getting a meeting with Firestone. He is open with her about the drug use and his need for new business, telling her flatly “I lost everything when I lost Lucky Strike.” That must be a wonderful thing to hear from one’s ex-husband. She agrees to try. Roger, a newly free man now that he is divorcing Jane, still can’t help his old habits. His liaison with Mrs. Calvet is still cheating (on her end, not his), and still feels illicit and impulsive, the actions of a man ruled by his desires, who never had to develop discipline.

Don is on top of the world for most of this episode — the Heinz campaign is saved, his wife’s intelligence is exciting to him, his children are growing up, miraculously, into decent human beings — but the facade crumbles a bit when he has a talk with Cynthia Cosgrove’s father, played by the perennially oily Ray Wise. Don is hoping to get new business out of the ACS awards ceremony, but Ray Wise has some unfortunate news for him. Even if he gets a hundred more awards, none of the businesses represented at the dinner with ever work with him, not after he “bit the hand that fed.”

Don sits down after this conversation with the Calvets, Megan, and Sally, and they all stare down at the table, not speaking to one another. They all look uncomfortable in their new clothes.