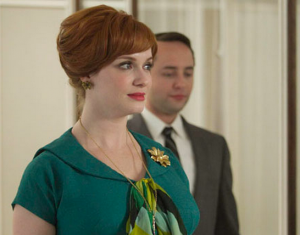 Because I have been a fan of Mad Men for years, I’m no stranger to the argument that Matthew Weiner is more cruel to the female characters on his show. The argument that Betty Francis is treated much more harshly for her (admittedly terrible) behavior than, say, Roger Sterling or Don Draper, is a legitimate one, but it frankly never bothered me very much until I watched last night’s episode, which felt like a series of humiliations for Joan Harris. It was a Mad Men episode, so it was still good, and nothing about the Matt Weiner-penned episode felt unrealistic, but goodness gracious, what a depressing hour of television. I understand in 1967 the power dynamics for women were different, and so the consequences for their actions might have a tenor different from that of their male counterparts, and Mad Men is not necessarily kind to any of its characters, nor is it a barrel of laughs, but my overwhelming feeling during the episode was “Why Joan? Why this?” The episode left me upset enough to wonder if I’ve let Weiner off too easy regarding his treatment of women, even as it affirmed his ability to make tremendously thought-provoking television.

We begin with Ken Cosgrove and Pete Campbell wooing one of the voting members for the Jaguar account, who makes it clear that what would really sway him in their favor is a night with Joan, who he saw and admired during a tour of the SCDP offices. Pete, being Pete, takes this proposal immediately to Joan, who can’t even remember any of the Jaguar guys and is aghast that Pete would even ask.

“Do you consider Cleopatra a prostitute?” he counters. Unsurprisingly, this line doesn’t work and Joan tells him he couldn’t afford what it would take to persuade her. Any normal person would leave it there, but Pete takes the idea to a partner’s meeting. Don refuses immediately and walks out, but the other partners are willing to have the discussion. Roger won’t oppose it, nor will he pay for it. Lane just wants EVERYONE TO GET THEIR BONUSES. Bert calls it dirty business, but doesn’t refuse either.

Perhaps the reason the partners are willing to consider the proposition is because creative is having a terrible time coming up with a pitch. Meanwhile, Peggy is handling all other business, since it’s inconceivable that a girl could be on the Jaguar account, and doing a fantastic job. She comes up with a change to a campaign on the fly during a conference call, thrilling Harry Crane and Ken, but Don is too distracted to be kind to her about it, and when she pushes back about being left off the account to which she just made the changes (moving the ad’s location from London to Paris, for instance) he throws a few bills at her and tells her she can use them to go to Paris. Ken comes to her office after that exchange and kindly tells her he’ll get her to Paris, and if not, they’ll both leave, but she has little use for his pact. She has coffee with Freddy Rumsen, who promises to hunt around for her next gig, and when she hesitates he tells her it’s exactly what Don would do.

Lane visits Joan and tells her that the partners are planning to offer her $50,000, but she shouldn’t say yes to anything but a voting partnership with a 5% stake in the company. Joan is surprised that Lane, who has always been in love with her in a gentlemanly sort of way, is encouraging this, but he acknowledges that this could take care of her and Kevin for life.

Megan is trying out for a play that would rehearse and preview in Boston, something Don selectively misheard. She tries to help out on the Jaguar issue but is quickly turned off by the dirty mistress angle the creative team is going for. There’s something of a mistress theme in this episode, between the car and Joan, and Megan visiting Don in his office to give him a “confidence boost” when he’s working late. Even she doesn’t escape embarrassment, though, as Don balks at the idea of her living in Boston for several months, which she interprets as a lack of support for her career. To make matters worse, at the audition, the first thing the casting team asks her to do, before reciting any lines, is a slow 360 degree turn.

Poor Joan. Sometimes I think that the changes in this decade are harder on her than anyone else. When Don learns that the partners voted without him, he races to Joan’s apartment, where her mother lets him in and fetches Joan from her room. She emerges in a green silk robe. He urges her not to go through with it; he doesn’t want to be in business with this kind of people.

“Oh, you’re a good one,” Joan says in an inscrutable tone, touching his face.

We see the following day, in flashbacks during Don’s pitch, that Joan went to the Jaguar man’s hotel room after all, where he put a necklace on her and then rather unceremoniously announced his intention to get down to business. We see, while Don likens “this car, this thing” to a beautiful, mercurial woman, the kind of woman that’s hard to control, that Joan had already returned to the apartment by the time Don got to her, that she put her silk robe on over the dress she wore to meet the Jaguar man, that Don being the only partner who valued Joan too much to consider the indecent proposal no longer mattered. When SCDP finds out that they landed the account Roger gathers all the partners in his office, Joan included, and when she comes in Don knows what she did. It’s unclear if it was the presentation that won the account, with the Ginsberg-penned tagline “At last — something beautiful you can truly own,” or if it was Joan being sold for that single evening.

Thank God for Peggy Olson, who takes Don aside amid the celebration to tell him she’s leaving. At first he’s impressed with her gamesmanship, telling her “You’ve finally picked the right moment to ask for a raise,” but she’s unmoved and insists she really is going to another agency. My heart breaks for Don (and Ken!), and Don’s expression when he realizes what’s going on is terribly sad. Peggy holds out her hand to shake his, and he takes it and presses his lips to it, like she’s a lifeline. It feels so right for Don to pay this kind of homage to her, as she’s been his emotional and professional support system, not to mention an outlet for his anger and frustration, countless times. Peggy gathers her things and heads for the elevator, unnoticed by the revelers apart from Joan. She waits for the elevator and as it opens she starts to smile, and we hear the opening bars of The Kinks’ “You Really Got Me.” It’s a great moment, and badly needed, because this episode is depressing in every other respect.