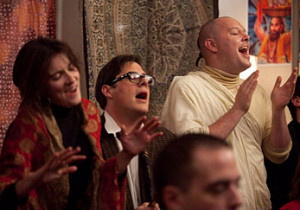 This season’s Christmas episode was like an inverted Christmas special from any other show — instead of characters learning lessons or doing good deeds, various characters’ greediness and spiritual bankruptcy was on display. So basically, it was your typical episode of Mad Men.

Lane Pryce continues to be tormented by his past in England despite traveling across the Atlantic to escape his homeland. Now he owes several thousand dollars in back taxes and needs to come up with the money quickly in order to avoid prison. He asks for an extension of credit for Sterling Cooper Draper Pryce: when it’s granted, he comes up with the idea to parcel it out in Christmas bonuses in order to get the cash right away. It seems like the partners are going to go for it, until Bert and Pete ultimately decide it would be more prudent to wait until after the holidays. Lane forges a check with his signature and Don’s in the office late at night, but it’s unclear whether or not he cashes it. Given his reaction when his wife suggest returning to England for Christmas, and his insistence on staying in the United States, my guess is that he didn’t. Poor Lane is a fundamentally decent guy, which makes it even sadder when he ends up in messes like these, often engineered out of his own desperation and sadness.

In other business news, Jaguar has come back to SCDP, hat in hand, now that Edwin Baker has left the company (whether it was voluntary is unclear). Pete is psyched to get the account, but his enthusiasm is somewhat dampened by Don’s apathetic and uncharacteristic response of “It’s a lot of work.” He deals with this, in typical childish Pete fashion, by whining at a partner’s meeting that “No one has given [him] the reaction [he desires],” which Bert takes as an opportunity to complain about how those cars never start. Don can’t get excited about the account, and seems a bit sour on advertising in general; that is, until he goes to see a terrible looking experimental play starring one of Megan’s friends that skewers the whole industry. He tells Megan he doesn’t mind “bankrolling her friends” by buying tickets to their shows, but doesn’t want to be insulted in the process.

He has the opportunity to take Megan on a business visit to the Jaguar showroom, but decides to take Joan instead. She gets served with divorce papers by her terrible husband one morning, and manages to smash an airplane figurine on the lobby receptionist’s desk before Don gets her out of there. They convince the Jaguar salesman that they’re a couple and Don persuades him to let them take the tiniest, sportiest car in the showroom for a spin, which leads them directly to a bar. They have an absolutely wonderful scene together, in which they flirt and Don reminisces about how many flower deliveries Joan used to get at the old agency (“I thought you were dating Ali Khan”), and she replies that her mother “raised [her]to be admired.” When she asks why he never sent anything he tells her he was intimidated by her, then congratulates her on being freed from her husband and encourages her to fall in love again, cementing his status as the perfect wing man by leaving her cab fare in case there’s no one in the bar to her liking.

When he returns to the apartment, drunk (hope that car was returned okay), Megan is waiting and furious. It’s not clear why she’s upset until she tells him “You used to love your work, long before you met me.” Even Megan is starting to be disturbed by this carefree version of Don, who leaves work at 1pm to get drunk and test drive sports cars. The following day Joan gets a flower delivery, put on her desk by Roger (who has been annoying her throughout the episode with LSD-motivated offers to give her money to raise their son and wearing Hawaiian shirts to the office), with a card that reads “Your mother did a good job. – Ali Khan.” Oooooh boy. The episode ends with a rousing speech from Don about closing the Jaguar account, putting his brain firmly back in the office, and perhaps taking him further away from Megan.

The most bizarre storyline of the night, however, was the reunion of Harry Crane and Paul Kinsey, who is a Hare Krishna now!!!! Amazing. Harry meets him at some kind of prayer session, led by Ranjit from How I Met Your Mother, for crying out loud, and gets pretty into it despite himself. When he and Paul go out for some food afterward Harry thinks he wants a job, but it turns out he’s happy with his new religion, and his girlfriend “Mother Lakshmi,” a ex-drug addict/ex-prostitute formerly known as Janet. He just happened, however, to write a script for a new episode of Star Trek, and wants to know if Harry will pass it along to some higher-ups at NBC. Harry reluctantly takes the script, and has a good laugh with Peggy over the thinly-veiled racial politics, before getting a visit from Lakshmi herself, who claims to be infatuated with him after their meeting the other day. Harry isn’t able to resist this, but it isn’t until the deed is done that Lakshmi changes her tone, and orders Harry to discourage Paul’s writing ambitions, and to stay away from him, for that matter. “I’m trading the only thing I have,” she tells Harry, and when he responds “But you already gave it up” she slaps him across the face and leaves.

Harry goes to meet with Paul, and tells him that his contact at NBC loved the script, but they can’t use it because of potential lawsuit/intellectual property complications. Paul presses for an introduction, but Harry firmly tells him “They’re not interested. But I am.” He gives him an envelope containing $500 and a bus ticket to Los Angeles, encouraging him to leave this new life in New York behind and try to make it as a writer. It’s a complicated moment, since Harry can’t really believe that Paul is going to succeed writing for television, but he clearly seems worried about his friend, and eager to separate him from Lakshmi, who does seem completely bonkers. Paul, after very little convincing, accepts. “All these people said they’d do something for me. You’re the only one who actually did,” he says, and leaves. Harry seems a bit disturbed the whole thing. You and me both, man.

So ends one of the saddest Christmases I’ve seen onscreen. Here’s hoping that 1967 brings some new joy and adventure into these characters’ lives — though I doubt it.