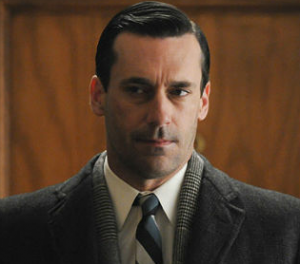 The season finale of Mad Men couldn’t possibly live up to the episode “Commissions and Fees” that preceded it, and the show very smartly decided to refrain from any attempts to top what we saw last week. The result was an episode that certainly didn’t feel like a finale in the traditional sense, but set up quite a bit of conflict for Season 6 nonetheless.

The parallel between Ginsberg as “the new Don” and Don Draper as The Man continues apace, and is getting a little tiresome and costing the firm some good will with its clients. Also making life at the office more difficult is Peggy’s absence, since the clients have grown to rely on her female perspective. Peggy is settling in with Ted Chaough, though all might not be rosy since she runs into Don during a secret Solo Movie Date of Dissatisfaction during a work day. He’s genuinely excited to see her, but when she suggests they get together with Megan the movie’s music drowns out his rather noncommittal reply.

Lane’s death is haunting everyone this week in different ways, and one of the ways that SCDP is dealing with his absence is by expanding into office space on the floor above them, a move that the frugal Lane most likely would never have allowed. Business is still booming, despite the death of a partner, or rather because of it — the firm receives a $175,000 payout from their insurance company (remember that suicide provision that Pete teased us with earlier?) and though Joan is still working to be seen as an equal by the other partners she has no problem unilaterally backing Don’s impulse to give some of that money back to Rebecca Pryce, who is not what one might call grateful. “We’re not ones to wallow,” she tells Don, and later spits “You had no right to fill a man like that with ambition,” brandishing the photo Lane stole from that man’s wallet many episodes ago before kicking Don out of the apartment.

Pete is still feeling suffocated in the suburbs, but at least he isn’t Beth, who gets sent to the hospital for some light electroshock therapy by her husband. She calls Pete and asks him to meet her for an assignation before she checks in, since she knows that she’ll probably lose some of her memories. When Pete visits her afterward she is polite and friendly, but clearly doesn’t remember him, giving him the opportunity to unburden himself. He calls their affair “a temporary bandage on a permanent wound,” one that is yawning ever wider with Trudy’s ambition to build a pool in the yard and acquiescence to Pete’s request for an apartment in the city (he comes home with a black eye, which she assumes is due to drunk driving and not to getting punched by Howard and the train conductor on the Metro North).

One of Megan’s dumb friends (please, less of Megan’s dumb friends in Season 6!) gives her the idea to ask Don for a shot at a new shoe commercial for one of SCDP’s clients, which he balks at since he doesn’t want the client (or Harry and Stan on casting day) to think that he’s pulling strings for his wife. He also gets some nasty shots in about Megan’s disdan for advertising, and she goes on a rather epic bender that’s not helped by her mother being in town. Her mother tells her to be grateful that Don supports her even though she won’t have all of his babies, and when Megan recoils she snaps that she’s an “ungrateful little bitch” and leaves, declaring “Thank God my children aren’t my whole life.” How else is she filling the hours? By meeting Roger Sterling for a roll in the hay after he makes a billion hang-up calls to Megan and Don’s place, and gently rebuffing his request that she drop acid with him. Obviously.

Don is having a rough go of it in this episode, with a drunk self-pitying Megan trying to lure him into bed because “that’s all I’m good for,” Megan’s mom blaming him for her unhappiness (“She left my house a happy girl,” and also this gem: “This is what happens when you have the artistic temperament but you’re not an artist”) and thinking that he sees his brother Adam, who hanged himself in Season 1, everywhere in New York City. Adam’s in the elevator, in the office and at his appointment with the dentist to remove a tooth that’s been bothering him. “It’s not your tooth that’s rotten,” Adam tells Don matter-of-factly, giving us a glimpse at the purple bruise on his neck from the noose he made. Despite this creepy sight, Don begs him not to leave him alone. “Don’t worry, I’ll hang around,” Adam says. “Get it?”

At the end of the episode we see Don watching Megan’s screen test in the office, smiling both fondly and sadly at her image on the screen. Later, we see that she’s landed the shoe commercial, although it’s not clear whether that was due to Don’s interference or not. He kisses her encouragingly on set, then walks away from the bright lights in the studio, to a dark bar. He’s not there for thirty seconds before an attractive blond approaches him, asking for a light. We get brief glimpses of Peggy on a business trip to the middle of nowhere, Roger naked and blissed out in his apartment, Pete blocking out the world with a set of enormous headphones. “My friend wants to know,” the blonde asks Don, “Are you alone?” He looks at her.