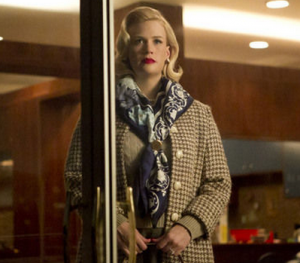 This week’s episode of Mad Men gave us one example of pettiness and venality after another. It was a reminder that even after following these characters through a number of years, many of them are stuck in the same adolescent pattern in which they started, and probably will be forever.

It’s a big week on the business side: Don and his team are working on a campaign for a soft drink called “Sno Ball,” and they narrow it down to two pitches: one from Ginsberg that is a play on snowball fights, and one from Don that references the expression “snowball’s chance in hell.” Ginsberg’s idea is fresher, more youthful, and clearly right for this pitch. In the past Don has always placed the highest premium on doing the best work, but in this case he can’t stand being outshone by a junior member of his team, and ends up “forgetting” the illustration for Ginsberg’s pitch in the cab prior to the meeting. When Ginsberg calls him on it later, Don lies “I don’t think about you at all.” Don’s relevance is called into question again when Sterling Cooper Draper Pryce gets left out of a Sunday Times feature on hip ad agencies, which seems to push him ever closer toward becoming a cranky old man. It’s nothing compared to the devastation that Pete Campbell feels at being left out of the story, since he had convinced himself he would be the star of the piece and that Alexis Bledel would have sex with him in his office after reading it. None of these things come to pass.

In other news, Ginsberg is doing some extra secret work for Roger, who is working with Bert Cooper to get an account with a Monarch, a company that manufactures kosher wine but is looking to break into the Gentile market. He settles on Ginsberg as the natural choice for the job and asks him to come up with some ideas he can pitch at dinner to look smart to the potential clients, which Ginsberg agrees to do after he extorts Roger for $200 (“I’ve got to start carrying less cash,” Roger sighs) and warns him that he’s not able to keep a secret. True to form, he tells Peggy immediately, and she’s offended that Roger has found somebody else to do his secret creative work. When she confronts Roger he argues that Ginsberg’s a better fit because he’s Jewish, and Peggy whines that she’s sick of people using that logic. “It’s every man for himself,” Roger tells her, a sign that while Ginsberg might still be pigeonholed by his ethnicity, in Roger’s eyes Peggy is just another copywriting dude. Progress?

Roger gets extorted again almost immediately, this time by Jane, who is in the process of divorcing him but whose Jewishness Roger needs to impress the Monarch executive at dinner. She gets him to agree to buy her a new apartment (aim higher, Ginsberg and Peggy!) but after they have a post-dinner roll in the hay in the new place she tells him that it’s been ruined, since now it’s also tainted with the memory of their failed marriage. “You get everything you want, and you still had to do this,” she pouts.

Unsurprisingly, however, the grand prize for immaturity has to go to one Betty Francis, who has joined Weight Watchers since we saw her last, and is trying desperately and not all that successfully to get her weight under control. She has to suffer the twin blows of seeing young, gorgeous Megan in her hip apartment in the city when she picks up the kids, and reading a love note Don wrote to Megan that Bobby Draper used as scratch paper for drawing a picture. Naturally, she chooses to lash out at Don and Megan through Sally, who is working on a homework assignment that involves drawing her family tree. Betty innocently tells her to include Don’s first wife, Anna, and expresses her surprise that Megan never told Sally about her. Oh, Betty. Sally flips out at this, snarling at Megan later on that she thought they were friends, but now she knows that Megan is a “phony.”

“You’re not special, and neither is Anna” she tells her.

It’s hard to feel bad for Betty when she does things like this, even when they’re followed by truly tragic behavior like spraying whipped cream directly in her mouth, spitting it out and swishing with water at the kitchen sink. Her Weight Watchers meetings emphasize the emotional connection with food, and she seems to be absorbing some of it — like when she has a gentle and understanding talk with Henry about his frustrations at work — but she can’t help taking out her feelings of anger and helplessness on her children.

The only person who seems really in tune with the feelings and motivations of the other characters this week is Megan, who is wounded by Sally’s rejection of her and upset when Don yells at her too. He’s clearly just looking for someone to blame, and Megan successfully talks him out of calling Betty, since it will just “give her the thrill of poisoning [them] from fifty miles away.” It leads to a sweet moment between Don and Sally when he comes clean about his first marriage, and Sally goes home to her mother and tells her that she saw pictures of Anna. It might be an exaggeration, but it certainly has the desired effect. Betty looks like she’s choking on her disappointment, and sends her daughter to watch TV. The final shot of the episode is Betty’s sad dinner plate, nearly bare but for a few tiny spoonfuls of Thanksgiving dinner. It’s fitting, since she certainly doesn’t have much to be thankful for.