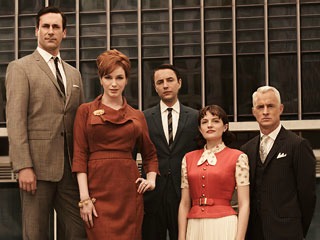 Mad Men was gone so long that there was a stretch of several months when I didn’t think about the show at all — it was as though it had never existed, or had already ended. The endless coverage of the its return in March reminded me of its existence and heightened my anticipation of the premiere. After a year and a half long hiatus, a new, two hour-long episode aired last night, and I was expecting nothing less than a complete return to form. These are nearly impossible expectations for any show to meet. So — how was the premiere?

For most of the episode I kept waiting for a moment where I would think “the show is better than ever!” or “I’m so disappointed!” but that moment never came. Instead, I felt like the wait for the premiere was much shorter than I remembered, like I had just finished watching Season 4 not too long ago. The hiatus even seemed to make sense in light of the characters’ situations in the premiere — so much has changed that it would feel strange if Seasons 4 and 5 aired too close together.

The men and women of the Mad Men universe sure are dealing with quite a bit of change, and the episode was bookended nicely with a scene of several ad men at Y&R throwing paper bags filled with water at African-American picketers marching below. Sterling Cooper Draper Price is delighted that Y&R has created such a public relations disaster, and the agency takes out an ad in The New York Times cheekily reminding the public that they are “an equal opportunity employer.” This small co-opting of the civil rights movement to settle professional grievances comes back to haunt SCDP at the end of the episode, when their lobby is overrun with African American job applicants, and they have no choice but to hire “one of them.” It was a nice reminder that, try as these characters might to maintain the status quo, there are cultural forces beyond their control that are remaking the world — and it was a way to integrate SCDP without making the characters seem anachronistically saintly and tolerant.

In this episode, all of the babies promised at the end of season 4 have been born, including Joan and Roger‘s son. Joan’s mother is visiting to help her with the baby, and her evil doctor husband is still at war, leaving her overwhelmed with the demands of her infant and almost no adult conversation (besides the undermining, snippy exchanges she has with her mom). She takes the baby to work, desperate for contact with the outside world and unsettled by what she, too, perceives as a “We’re Hiring” notice in The Times. She has a lovely reunion with Lane, who admits the company is somewhat adrift without her and they can’t wait to have her back. Pete Campbell is also a new parent and seems to hate his recent move to the suburbs and his wife’s slow post-baby weight loss. He is frustrated at work, too, feeling as though he brings in all of the new business but lacks authority with the partners (especially with Roger, who flirts with Pete’s secretary in order to sneak glances at his calendar and crash his meetings — that is, when he’s not insulting his young wife, whose admiration of him has calcified into hatred after a few years of marriage). He starts a pissing contest about getting a larger office and manages to succeed and fail at his mission simultaneously, which is so Pete it hurts.

Lane and Peggy are searching for different things in this episode, but they both have the same desperate, grasping quality to their actions in the premiere. Lane’s wife is with him in New York and he is obviously having money troubles, worries he keeps at bay by almost phone sexing a girl whose boyfriend’s lost wallet was discovered by Lane in a cab. He’s hoping the girl will come to collect it, but the boyfriend shows up instead and insists that Lane take a reward, not knowing that Lane has hidden away a wallet-size photo of the girlfriend for closer, uh, inspection. Peggy is still all about the job, despite still dating her terrible original hipster boyfriend, and is unsettled that Don no longer seems to care about work.

That’s right — Don isn’t all that concerned with work right now, not when he has his pretty new French-Canadian wife unbuttoning her blouse for him at the office, serenading him in French and cooking up weird, angry role-playing games for him at home. She’s copy-writing at SCDP now, and Don doesn’t seem threatened all that threatened by her ambition (all of that adventurous sex probably helps). She throws him a party for his Don Draper 40th birthday, even though his Dick Whitman 40th has already come and gone. Like Betty and Suzanne the schoolteacher, Megan is beautiful and young, but she is also emotionally resilient (she has a quiet moment on the balcony when Don reprimands her for throwing him a surprise party, and mentions something about it to Peggy, but seems to recover quickly), sexually creative and fluent in French. The point is, she’s got a lot of tricks up her sleeve to keep Don happy and interested, and as long as women make Don feel good, he likes being around them. I don’t think she’s going anywhere anytime soon.

This episode was interesting in that it felt looser, unhinged — the humor was more broad, the sex seemed more perverse and unglamorous, and the interiors of Don and Jone’s apartment, the SCDP offices and Pete’s new home looked shabbier and more ordinary. The most evocative image, to my mind, came at the beginning of the episode when Sally Draper woke up in her father’s new apartment and wandered down the sparsely decorated hallway to knock on her father’s bedroom door, claiming to think it was the door to the bathroom while sneaking a glimpse of Megan’s nude back. It was a brief glimpse into a more chaotic, messy, unpredictable world — one that all of these characters are going to have to adapt to as the decade nears its end.

“Mad Men” airs Sunday nights at 10/9 Central on AMC. We will be back with a recap of the second episode next week.