So: What Was The Weirdest Moment On Last Night’s Mad Men? (NSFW)
videos

So: What Was The Weirdest Moment On Last Night’s Mad Men? (NSFW) 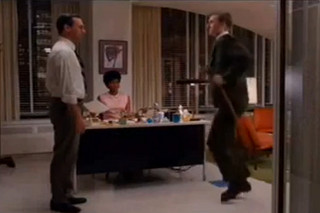 By now you’ve had several hours and a night’s sleep to digest last night’s episode of Mad Men, “The Crash.” While there’s plenty of debate – and likely will be for a long while to come – about whether it was a good episode or not (for the record: I’m with Alan Sepinwall; this wasn’t one of the show’s best), one thing’s not worth arguing: this was the batfeces nuttiest Mad Men episode of all time, by a lot. The episode was so delightfully weird that, for a time, it had me convinced it was better than it actually was. It was so weird, in fact, that it deserves to be documented, and we’re here to do just that: below, the five strangest scenes from “The Crash,” presented in the order of their airing.

1. Ken Cosgrove Goes For A Drive

“The Crash” wasted no time getting weird: the scene above, in which relatively mild-mannered, well-adjusted Ken Cosgrove – maybe the most functional human out of all Mad Men’s regulars – goes for a joyride (well, maybe “joy” isn’t the right term here) in which he’s constantly endangered by his car-mates’ terrifyingly reckless behavior, opened the episode, without context. A minute in, and we’re already left to wonder what the hell’s going on. Was poor Ken kidnapped? Did he fall in with the wrong crowd and hide it well? Not exactly. And this scene helped lead to…

What actually happened: the agency’s working with Chevy. It’s Ken’s job to keep Chevy happy. If that means driving a car while Chevy execs drunkenly cover his eyes, fire guns, and otherwise endanger his life to the point where he’s lucky to escape with nothing worse than a busted foot, so be it. Ken knows that’s his job, and articulates it in splendid fashion after he – and a good portion of the rest of the office, in the catalyst for much of the episode’s weirdness – gets hopped up on a magical butt injection of speed to boost creativity (which, in turn, will give them all the ability to keep Chevy happy). And if you’d prefer the dance in gif form:

Art director Stan Rizzo also took the Magical Speed Butt Injection (MSBI, for short), and in addition to engaging in footraces around the office, also apparently found himself impervious to pain. Stan, no stranger to weird antics to begin with, decides he’s cool with facing a firing squad consisting of coworkers trying to throw X-Acto knives at a printout of an apple above his head. This ends as poorly as it’s destined to, but Stan and his beard, with the help of the MSBI, shrug it off without an issue, further cementing Stan as a fan favorite.

This wasn’t a result of the MSBI, but it might have been the strangest part of the episode… not to mention the most problematic. The weirdness is obvious – black lady who has never before appeared on the show and claims to be the main character’s mother, though she is quite clearly not. Thought it wound up not being a dream sequence, it was easy to picture it being one as it unfolded.

Burglar Mammy was horrendous, a confirmation of every harsh judgment levied against Mad Men for being too much of a white upper-middle-class historical fantasy, a show that’s not willing or able to really go where it labors to convince us it’s going.

And a few reactions in real time:

Keep waiting to find out Good Times is actually a Mad Men spinoff.

I know Matt Weiner is awful with black characters, but just wait till Megan tells Don about her affair with new character John Shaft.

Awful with black characters? Sorry, but based on last night… you’re damn right.

Ever since Sterling Cooper Draper Pryce joined forces with rival agency Cutler, Gleason, and Chaough, the latter’s Jim Cutler has been presented as an analogue to SCDP’s boozing, fast-talking, sleazy-but-makes-you-like-him-anyway silver fox Roger Sterling. But even Roger never goes as low as Jim does above, snooping on Stan getting it on with a girl who visited the office while everyone was out of their minds on the MSBI. A girl, it’s later revealed, brought to the office by Jim in the first place. And who was a colleague’s daughter. A colleague who just died of pancreatic cancer.

After that, the episode – along with the MSBI-aided characters – came back to earth, but nothing could erase the audience’s befuddlement at what had just happened for the preceding 50-odd minutes. Will the show go back to its expertly-observed-understated-character-moments roots next week? Can it, after what it did last night? I hope it does, at least for the most part – as soaring as last night’s highs were, the episode as a whole fell short of what the series is capable of at its best – but now it’s time to wait a week to find out. In the meantime, at least we still have this: