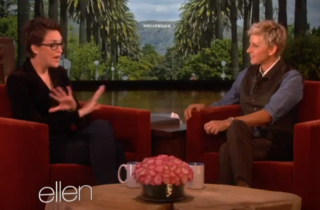 “I’m not a very good dancer,” Maddow told DeGeneres, whose guests frequently dance their way onto the set.

The progressive host told DeGeneres that presidential elections are like a major holiday for her: “Imagine that Christmas happened only once every four years in your life, then you would be a pundit. Ah! Four years! Here it is!”

Maddow then emphasized that the debates are her favorite part of the election cycle because of the competition between ideas, adding that it’s like “democracy Christmas, I love it.”

DeGeneres asked Maddow for her thoughts on the first debate. The MSNBC commentator reiterated that “Romney won,” noting that it’s actually “not that weird” considering how incumbent presidents never debate during their terms and may become a little “rusty” at that sort of competitive art.

Asked about President Obama’s newfound support for gay marriage, Maddow noted that both Romney and Ryan are “absolutists” in their “anti-gay” positions on marriage, and the Republican Party as a whole is experiencing a crisis as the rest of the country moves toward accepting same-sex couples.

DeGeneres then asked if Maddow ever turns off from her love of politics and focuses on leisure activities. The highly-political news anchor admitted to coming home and watching MTV’s Jersey Shore reality program.

“I have to say this season is a little disappointing,” lamented Maddow. “I mean, if you like Jersey Shore, you’re not there to see The Situation get his life together with a sober coach.”

“You’re not there for models of personal responsibility,” she joked, “I’m not there to see improvement.”

“Do you know the dance?” DeGeneres asked.

Maddow apparently did, performing a tiny bit of the dance in her seat.