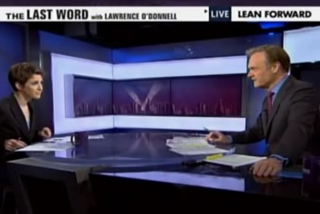 President Barack Obama finally provided the nation with a long-form explanation of his decision to enter the fray in Libya tonight, and despite the many critiques from the left on opening up yet another warfront for America, the reception to his statements from Rachel Maddow and Lawrence O’Donnell tonight was overwhelmingly positive. While O’Donnell focused on how practical Obama presented the mission, Maddow appreciated his focus on greater national interests.

Among the most prominent concerns on both the left and right with the intervention in Libya was the fact that the revolts there did not happen in a vacuum– Syria, Tunisia, Morocco, Yemen, and other Middle Eastern nations also face similar conflict, and many wondered whether stepping into one fight would necessitate further action elsewhere. President Obama’s speech tonight eliminated that possibility for both Maddow and O’Donnell. “We looked at this theater of war and decided we could win here,” O’Donnell paraphrased, highlighting how practical the president made the mission sound, and how much he emphasized the humanitarian and not political side of the effort.

Maddow agreed, noting that the speech’s main goal was to distinguish Libya from Syria, Yemen, et al. Noting in particular the possibilities of an influx of refugees as well as credibility with the UN as points the President was correct to emphasize, Maddow noted that all these issues legitimized the effort. What’s more, the speech to her solidified the very America perspective that there is “human value [in democracy] that transcends politics,” and in this she surprisingly compared it to President Bush’s second inaugural address, praising the latter.

Maddow also compared the speech to President Obama’s Nobel Peace Prize award speech, much to O’Donnell’s chagrin, and concluded that the former echoed the latter significantly. “He was making the same case,” she asserted, to his benefit.

Maddow and O’Donnell’s post-speech commentary via MSNBC below: