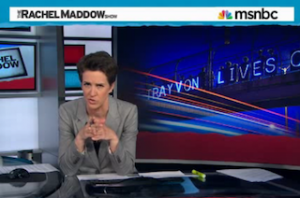 Rachel Maddow went directly after “Fox News world” last night for their mischaracterization of protests that followed George Zimmerman‘s acquittal Saturday night. She contrasted Fox’s conspiracy theory-laden coverage about the Justice Department organizing the demonstrations with the “real world” in which the DOJ has tried to “keep all the protests peaceful.”

After showing footage from the largely non-violent protests that have developed over the last several days, Maddow explained that before Zimmerman was charged with the murder of Trayvon Martin, the DOJ dispatched a special unit called the “Community Relations Service” to Sanford, Florida in an attempt to “make sure everyone on both sides behaved peacefully.” She then pointed to recent reports from the conservative site Judicial Watch that claim the “protests had been drummed up in a conspiracy by the Obama administration.”

After showing an appearance by Judicial Watch president Tom Fitton with Fox’s Martha MacCallum, Maddow said, “so says Fox News world on that subject.” In the “real world,” she added, “the Justice Department helped plan to keep protests peaceful.” But that hasn’t stopped Fox News from being “outraged about all of that.”