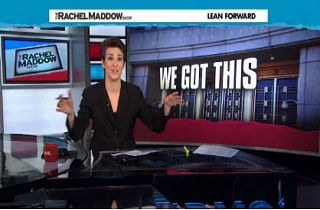 Maddow walked viewers through a segment with a geography lesson of Manhattan that showed where the World Trade Center is in relation to her MSNBC studio and the federal courthouse where terrorism suspects have been tried. Maddow relayed that the terrorists that go to a court that is “ten blocks” from the site of the worst terrorist attack in American history usually end up in a federal SuperMax prison.

The same court that tried Yoused and Abdel-Rahman was again buzzing with activity this week with the trial of Sulaiman Abu Ghaith, an Al-Qaeda spokesman. He was charged with a the crime of conspiracy to kill Americans.

Hawkish Republicans like John McCain and Lindsey Graham greeted this trial with outrage and Maddow blasted them for not celebrating the capture and trial of a notorious terrorist.

“They said the right decision would have been, of course, to ship this guy to Guantanamo. There argument is that Guantanamo is so much better!” she said.

Maddow shredded their claim that the government couldn’t gain any intelligence from him without sending him to the controversial Cuban prison by pointing to several pages of interviews with Ghaith.

She continued to blast the Republicans in her trademark mocking style.

“But still, everybody freak out! Double Guantanamo! Maybe that will help you get re-elected if you ever have to go back in a time machine to run for office again in 2004,” she said.

Watch below, clip from MSNBC