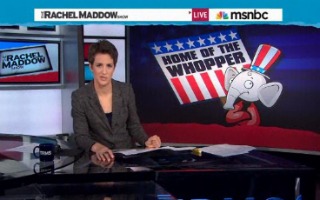 On Friday, MSNBC’s Rachel Maddow took a look at the response to Mitt Romney‘s remarks as news of protests overseas broke here in the U.S. In particular, she cast her gaze on Richard Williamson, the Romney campaign’s senior foreign policy adviser, who told The Washington Post this week that, if Romney were president, the protesters would not have stormed our embassies overseas in the first place because they would have more respect for the United States and for the president’s “resolve.”

Williamson, Maddow pointed out, previously worked within the Bush administration, serving as Bush’s Special Envoy to Sudan. During that administration, said Maddow, there were fatal attacks on U.S. diplomatic sites in Yemen, Syria, and Pakistan, as well as the September 11 terrorist attacks on U.S. soil. “Where these attacks,” Maddow asked, “because George W. Bush didn’t have resolve?”

Maddow guessed that is not actually an argument the Romney campaign wishes to have, but it is the argument they’re making in public.

Washington Post columnist Eugene Robinson then joined the host, referring to the campaign’s response as a “late and half-hearted and amateurish” attempt to make chicken salad out of something less pleasant than chicken and gourmet wasabi mayonnaise (recommended!).

Maddow agreed, noting that Romney’s response seemed to demonstrate a sort of “inappropriate temperament” for someone so close to a sensitive role. In fact, his reaction made her question the U.S.’s vetting process for our would-be leaders.

She then turned the discussion over to the argument that Romney’s foreign policy plans don’t matter and won’t form a huge part of this election, asking Robinson if this line of thinking still stands in light of the current turmoil overseas. He felt this has never been the case for an election, because foreign policy will always matter, there will be crises and there will always be crises.