Maddow Calls Out ‘Democratic Wuss-itude’ on Airstrikes Against ISIS
VIDEO

Maddow Calls Out ‘Democratic Wuss-itude’ on Airstrikes Against ISIS 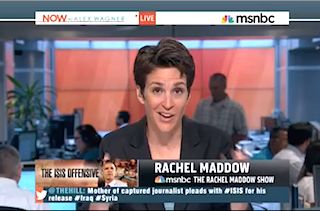 Rachel Maddow made a rare daytime appearance on MSNBC Wednesday, sitting down with Ezra Klein, who was filling in for Alex Wagner, to talk about the possibility of a Congressional vote to authorize airstrikes against ISIS in Syria. Referring a report from The Hill quoting unnamed aides on the Left who don’t want Congress to vote on the issue, Maddow diagnosed a severe case of “Democratic wuss-itude.”

The Hill quoted anonymous sources, who said it would be politically “stupid” for Obama to put Democratic Congress members in the position of having to vote for military action in Syria or Iraq. Sen. Tim Kaine (D-VA), who been pushing for vote, said, “The notion of, ‘Well, we don’t want to cast a hard vote before a midterm because it might be unpopular,’ that’s the job we volunteered for.”

Maddow imitated Congress’ position on the matter, saying, “Please let us keep complaining from the peanut gallery and throwing stuff. Please don’t actually make us be the decision makers on this, which the Constitution says we ought to be.”

On The Hill piece specifically, Maddow added, “It’s one of the biggest outbreaks of Democratic wuss-itude we’ve seen I think, in the press, in a long time. I understand why nobody put their names on those quotes. It’s sort of obscene.”

While she said Americans are “wary of being baited into a war, which I think ISIS is clearly trying to do,” at the same time she said the public is “violently disgusted” by ISIS. “I don’t think anybody can say with clarity what the political consequences of a vote to authorize those airstrikes or not, and at a human level it’s a sort of disgusting calculation to be making,” Maddow added. “To talk about political consequences now is just unclear first of all, and it’s gross.”