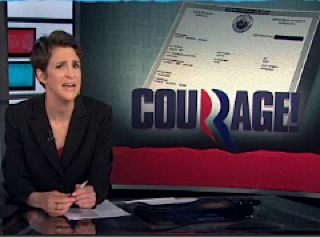 Donald Trump is many things, but in the political world, he has made his recent name on being a birther. This argued Rachel Maddow last night, giving him credit for being a great asset to Mitt Romney’s campaign but questioning the morality of having a birther be a great asset to one’s campaign. What to do, Maddow asked, when “the single best known household name to speak up” for you also thinks the President is a “Kenyan Usurper”?

RELATED: Ed Schultz: Would ‘Birther Nonsense’ Be Going On ‘If We Had A White President’?

“Whatever it is Donald Trump does for Mitt Romney, it seems to be working and Romney seems to think he needs it,” Maddow noted on her program Friday night, which is great for Romney except for the fact that “Donald Trump is not letting the birther thing go.” She went through the various ways Trump was helping the campaign, from offering himself up for dinner with a donor to going to and hosting fundraisers. She noted Romney’s campaign is standing by the decision to have Trump at a fundraiser, and wondered what the right thing to do for Romney would be.

“Nobody can be responsible for the views of all their supporters,” Maddow noted, arguing that if you, the viewer, had wacky beliefs and also liked Romney, that wasn’t really his problem. “But Donald Trump is not you– he is a prominent part of the Romney campaign.” Romney, she concluded, was “raising money off of Donald Trump… while Donald Trump is simultaneously preaching that President Obama is secretly not really the President,” and those two facts are not severable.