Maddow: Compared To Modern Conservatives, Both Obama And Bush Are Liberals 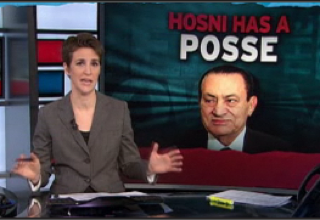 Rachel Maddow found herself arguing something she appeared to be surprised to find herself saying: George W. Bush, agreeing with Barack Obama, was correct– at least compared to Glenn Beck and Sean Hannity. Maddow argued that the American right, now that the Republicans were weak, was working on shifting the political spectrum right and have succeeded so efficiently that now the two presidents are essentially the same dot on the spectrum.

“The conservative movement tends to pull the Republican Party to the right constantly. Over time they are always pulling further right,” she explained on her program on Friday, and argued that this affects both the right the center. “The right is sprinting rightwards so fast,” she concluded, “that Obama and Bush stand together.” She then played clips of the two presidents both arguing that democracy is not culturally dependent, and that any nation in the world could support it if it chose to. Then she played a Fox News compilation of conservatives arguing the opposite, prominently starring Beck and Hannity, and noting that “the American right is way off the charts on the other side.”

Beck, of course, received the most blows of the segment– particularly for discussing the new world order that could potentially arise from a new Muslim caliphate and an increasing strong China in what sounded more like a Risk game than a real-world possibility. The irony, of course, is that the theory she is proposing– that a political window is being shifted by a fringe element such that extremism becomes centrism– is called the “Overton Window,” and was popularized by Glenn Beck.