Maddow Deflates GOP ‘Man Crush’ on Putin: ‘He’s Just Not That Into You’ 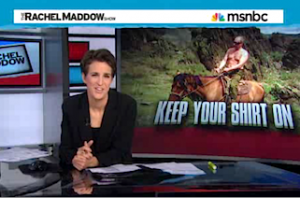 Fox News’ Eric Bolling may prefer shirtless, gun-toting Vladimir Putin to the fully-clothed, bike-riding Barack Obama, but according to Rachel Maddow, there’s another reason why conservatives are flocking to the Russian president. On her show Friday night, Maddow revealed that an anti-gay rights group called The World Congress of Families will be hosting their 2014 meeting at the Kremlin in Russia.

As Putin’s “becoming a hero to literally fascist groups in Europe for him being super anti-gay,” Maddow explained, “Vladimir Putin, and Russia under Putin are also becoming kind of a north star for anti-gay forces here at home in the United States.” Some on the Christian right are even suggesting that one Russia passed anti-gay laws, “people from the west would begin to emigrate to Russia the same way russians used to emigrate to the United States and Europe. American conservatives should move to Russia.”

But, as Maddow said, those extreme conservatives were “just ahead of their time.” Following Putin’s scathing op-ed in The New York Times, the rest of the right have chosen him to be their “new hero.”

“It is not just the far, far, far right, anti-gay right anymore,” Maddow said. “It is the right in general. Both in Congress and in the conservative media peanut gallery, who have decided real Americans should show how much they love our country by maybe moving to Russia. Because Vladimir Putin is the kind of strong and decisive leader that we want and we love.”

After playing a montage of conservatives praising Putin this week, she compared it to the “NC-17”-style love they used to feel for Sarah Palin. But unlike Palin, or President Ronald Reagan, Maddow told the right that Putin is “not that into you.”

“Seriously, I know you guys hate President Obama, so it feels good to have a man crush on somebody else,” Maddow concluded, “but this guy is a president of Russia. Zip it up, you guys, seriously. Have some respect.”