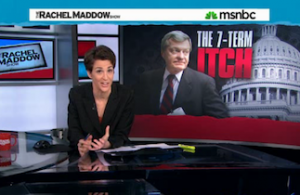 Rachel Maddow sees a disturbing trend in the recent news that Senator Max Baucus (D-MT) has decided he will not be running for re-election in 2014. This latest Senate departure caused Maddow to ask what is so terrible about the legislature’s upper house that is causing its members to “flee like rats from a sinking ship.”

As Maddow pointed out last night, Baucus was one of only four Democrats to vote no on the Manchin-Toomey background checks compromise, and had already faced some criticism from progressives in his state. Now that he has chosen to leave the Senate after six terms in office, liberals appear to be meeting the news with a figurative, and in one instance literal, “good riddance.”

But the “bigger question” at hand according to Maddow is “why are they all quitting?” She reported that with 25 senators voluntarily leaving office since 2009, “this appears to be the fastest pace of U.S. senators quitting that job in modern American history.”

Determined to get to the bottom of why the senate is “suddenly such an awful place to work,” Maddow said she has reached out to the various departing senators who are on their way out for interviews, even offering to discuss only “the senate as a place to work,” and not broader policy issues. So far, none of them have agreed to be interviewed.

“Tell us if something is wrong there,” Maddow pleaded. “What is the secret about this place that has you fleeing like rats from a sinking ship?”