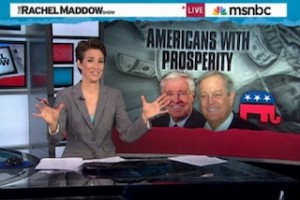 At the center of the debate over America’s stagnant economy, high unemployment, and deficit spending is the role of tax rates. President Obama has recently proposed a jobs bill designed to increase work force through infrastructure projects, paid for by the closing of some corporate tax loopholes, and yes, increasing some tax rates on the super wealthy. Obama’s detractors, primarily the GOP, have stated that it’s the super wealthy and corporations that are providing jobs, and raising their taxes would only hurt the economy. Last night, Rachel Maddow challenged that assertion effectively, using the privately held Koch Industries as the avatar for her supposition that the conservative rhetoric just doesn’t add up.

There is little dispute that corporate profits are at a record high — in fact some of Obama’s most ardent media supporters have questioned why the White House has been so pro-corporate, at the risk of losing populist support. And that is the leitmotif of Maddow’s argument in the following segment: that a critical look at the conservative rhetoric belies the actual facts, at least as illustrated by a fairly compelling (if not somewhat oversimplified) graph that compares the Koch brothers nearly doubling their corporate revenues, while decreasing their work force by roughly 20%.

If, in fact, increased corporate revenues are a key to lowering unemployment, then the Koch brothers appear to be an exception to the rule. Or, perhaps the correlation of lower tax rates to a lower unemployment rate is a concept similar to the emperor with no clothes. Some well regarded economic leaders on even the right have recently agreed with such a point, and recently Democratic senatorial candidate Elizabeth Warren has made a similar argument in a campaign video that has gone viral, which is where Maddow’s thoughtful segment ends up.

Watch the following clip and share your thoughts, embedded below courtesy of MSNBC: