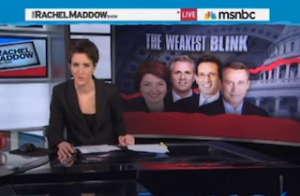 Rachel Maddow took on the Republicans’ decision to temporarily raise debt ceiling, delaying the coming fight for another few months, by looking deeper into spending under President Obama.

Yet, as she showed through video clips of House Speaker John Boehner and other Congressional Republicans, Obama’s “out of control” spending is what the GOP is using as justification for their opposition to raising the debt ceiling in any long-term or permanent way. As Maddow explained:

“These guys were not mad about George W. Bush’s big spike in spending, but they have decided to get really mad at the guy who is fixing that, and that anger is weird enough on its own terms. It’s weird enough that this Republican analysis of this problem is so divorced from reality. But what today’s news reminded us of is it’s not just the analysis that is weird, it’s also the purpose of the analysis, what they are using this cockamamie backwards analysis to justify that is really deeply strange.”

“Today, the House passed a bill to raise the debt ceiling,” Maddow said, “but they want to have us hit it again in a few months.” She warned against the economic turmoil that could hit the country if Congress continues to delay a real fix for the debt ceiling crisis, “because, remember, Obama’s a big spender.”