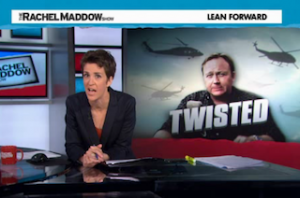 Rachel Maddow closed out her Wednesday night show this week by taking on a familiar target: conspiracy theorist and founder of InfoWars Alex Jones. Maddow began by reviewing how some of his more “out there” theories have started to penetrate the halls of Congress before moving on to the latest tragedy he has attempted to exploit: the Oklahoma tornado.

Maddow pointed out that Jones’ campaign to stoke fear about the government buying up too many bullets led directly to a bill proposal from Republicans in the House and Senate that would limit the amount of ammunition the Department of Homeland Security could obtain. She called the idea that we should be concerned about bullets when the federal government has armed tanks and drones is “so crazy, so out-there, that even the National Rifle Association wouldn’t touch it with a ten-foot rifle.”

Pointing to Jones’ attempts to prove that everything from the Newtown shooting to the Boston bombing to 9/11 were staged by the government, Maddow said the InfoWars world sees conspiracy in “every tragedy.” So is it really that much of a surprise that they now conspiracy in the Oklahoma tornado?

Maddow played a clip of Jones saying of Monday’s tornado, “I don’t know if this was a weather weapon or not,” suggesting that the government has the ability “create and steer groups of tornadoes.”

“Alex Jones should be disqualified from participating in Republican Party politics,” Maddow said. “He crack pot theories shouldn’t prompt hearings in Congress and inspire actual legislation.” She urged Republicans to stop taking Jones seriously and stop appearing on his radio show. “Can we agree that it’s over now, Republicans?”