Maddow Hammers Paul for Trying to Make Plagiarism Story About Her: ‘Good Luck, I Can Take It’ 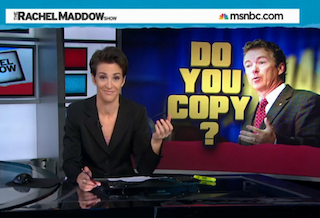 The war of words between MSNBC’s Rachel Maddow and Sen. Rand Paul (R-KY) raged on Friday night, as Maddow was forced to defend herself against accusations of plagiarism after exposing Paul for lifting portions of recent speeches from Wikipedia. “You can try to make this whole problem for yourself about me, try to make me the story,” Maddow said defiantly. “Go for it. Good luck. I can take it.”

Maddow accused Paul of using the same “I’m rubber, you’re glue solution” used by Mitt Romney during the 2012 presidential campaign. Just as Romney tried to turn his own running mate’s anti-Medicare record around on President Obama, “sources close to Rand Paul” are now attacking Maddow via right-wing websites like Rare.

“In politics, this is a classic,” Maddow said. “When you’re getting attacked for something, just accuse your opponent of being guilty of the same thing. Whatever the attack is, if it’s sticking to you, just apply those words in a substantively meaningless way to whoever’s saying it about you, so at least it starts to seem confusing to people or the words lose their meaning.”

The host pointed to articles from BuzzFeed and POLITICO that highlight additional instances of Paul plagiarizing not only Wikipedia but also the Associated Press.

“This is called running from your mistakes,” Maddow said of Paul’s response to the accusations. And since he has refused to “own up” to his errors, Maddow said, “it is now going to require more of an explanation.”