Maddow, Hayes Mock GOP’s Move to Center as They Push Democrats to the Left

Maddow, Hayes Mock GOP’s Move to Center as They Push Democrats to the Left 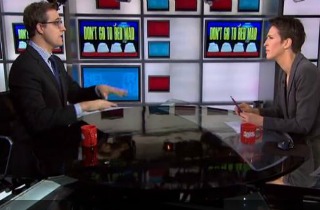 Talk about whistling past the graveyard.

Those right-leaning groups have contributed significantly to the perceptual hurdles the GOP is facing in their efforts to appeal to a broader electorate. House Speaker John Boehner’s (R-OH) recent outbursts at conservative groups, who he subtly accused of being more concerned with reaching their own fundraising goals than the health of the party, represent the party’s biggest figures dragging the GOP back toward the American center.

But this course, one long recommended by political commentators on the left, is not being as warmly greeted as one might think. On Thursday, MSNBC host Chris Hayes and Rachel Maddow engaged in an over-caffeinated conversation about the ongoing “fractal” “war” within the GOP that they appear to believe will inevitably spiral out of control. Even amid the GOP’s establishment standing up to conservative extremists, the hosts wonder whether the “GOP establishment” can ever stand up to “conservative extremists” –- at least, in a fashion that satisfies the two MSNBC hosts.

The ongoing course adjustment within the GOP is ultimately healthy. In fact, it is a condition that Democrats may soon experience firsthand, considering how vociferously activists like Hayes and Maddow cheer the rise of progressive outliers within their own party.

The rise of aggressive left-wing populism, the soul of which it has been declared is embodied in progressive Sen. Elizabeth Warren (D-MA), has been the subject of much handwringing within Democratic circles. The topic has barely piqued the media’s interest –- most outlets are already committed to the sexier, road-worn narrative of the “Republican civil war.” But moderate Democrats are deeply concerned about the rise of the “professional left,” as Robert Gibbs once called them.

Know who is not concerned? Chris Hayes and Rachel Maddow. Indeed, in a November segment on Maddow’s program entitled “This is why Democrats want Warren to run,” MSNBC’s flagship host touted Warren’s recent Senate floor speech in which she demanded Democrats run on the concept of expanding Americans’ access to the practically insolvent entitlement benefit Social Security.

Hayes, as he is wont to do, appears to agree with Maddow’s elevation of Warren. In a November segment highlighting Warren’s war with “the Democratic elites,” Hayes confessed that he and other liberals like him just “love Elizabeth Warren.” “She is willing to state the obvious truth that all of us know but that you almost never hear from people in the positions of power: that the system is rigged,” Hayes gushed.

Hayes and Maddow can gesticulate wildly as they want while they gleefully cover the GOP “civil war,” a “war” which looks more and more like a simple correction toward the center every day. Their audiences demand an endless stream of happy talk about the supposed chaos on the other side of the aisle. The hosts do not seem to recognize, however, that they are themselves are becoming the Democratic equivalent Heritage Action activists as they tout the creation of an insurgent progressive wing that is only temporarily stayed from mounting its own civil war.

The results of the 2012 election cycle continue to serve as the glue keeping the Democratic Party from exploding — a conflagration that MSNBC’s prime time hosts appear to welcome. But the political balance in Washington appears set to alter dramatically after the 2014 midterms. Then Hayes, Maddow, and their colleagues just may get the internecine conflict they are so eagerly inviting.