Maddow, Maher and Panel Yell About Reaganomics While Reagan Budget Director Looks On 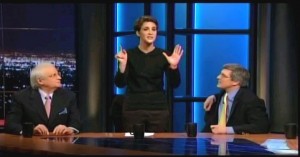 Political shoutfests are certainly no stranger to TV, and Real Time, despite being a generally friendly atmosphere, has hosted very heated debates over the years. But last night, a debate over Reaganomics between Rachel Maddow and the Wall Street Journal‘s Steve Moore which ended with Maddow uncharacteristically standing up to shout over her adversary had a bit of a twist: Reagan’s Budget Director, David Stockman, sat silently beside Maddow and watched.

Bill Maher opened the talk with discussion on how inflating the deficit through budget cuts was, according to him, a destructive Republican tendency that had overflowed from the Reagan administration to today. Moore leapt to Reagan’s defense, calling it the “greatest policy of the last 30 years” and noting the economic boom that came from lowering tax rates. Maddow, seated beside Moore, took some political offense, and Maher kept back and watched the two’s chat evolve into a venerable political shouting match. “What happened to the deficit?” Maddow demanding to know, as Moore replied only “What happened to the economy?” This went on for some time until both sides answered the others question (and therefore negated both of their points, returning them to indoor voices).

The indoor voices didn’t last, of course, as Maddow continued to make the point that income inequality peaked during the Reagan years, and, in order to complete her point over Moore’s voice, stood up and wagged her fingers angrily and concluded with a flourish by stating that, if you were anything but the richest of the rich in America, “Reagan sucked.” It was a Rachel Maddow we rarely get to see on our show– what one would imagine Maddow to be like if Crossfire still existed.

At this point, a laughing Maher leapt back into action to activate the third guest silently eyeing the debate– David Stockman, Reagan’s budget director and the man whose work the other two guests were shouting about. Maher noted the famous scene in Annie Hall where a pseudo-intellectual attempts to prattle on about the work of one Marshall McLuhan, who enters the scene only to say, “you know nothing of my work.” Similarly, Stockman enters the fray to clarify that, while he supported the tax cuts and agreed that they improved the economy, the “war on spending” that both sides were attempting to fight was “like the proverbial French army rifle: never been fired, and dropped only once.”

Speaking of firing, once everyone simmered down on the economics front Maher brought it back to things he disliked about Reagan, namely the fact that he did not pass stricter gun control laws after his assassination attempt. Of the three panelists, Stockman was shockingly the most anti-gun, arguing that they have “no place in 21st century civilization” and that “they should be scorned; they should be banned.”

The full segment from last night’s Real Time via HBO below: