Maddow: Media Should Avoid Candidates’ Families ‘Unless There Is A Hypocrisy Issue’
video

Maddow: Media Should Avoid Candidates’ Families ‘Unless There Is A Hypocrisy Issue’ 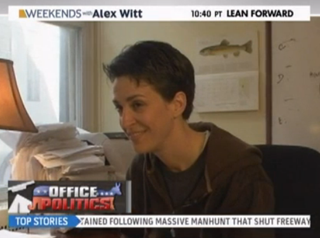 MSNBC’s Alex Witt‘s show, Weekends, carries the same relaxed weekend vibe of the shows that precede her– Up with Chris Hayes and Melissa Harris-Perry, and to enhance the casual feel of the show, she often finds her weekday colleagues buttoned down and asks about the issues in their home offices. In today’s segment of “Office Politics,” she sat down with Rachel Maddow to talk about candidates and their families, a subject Maddow insisted should be as off-limits as possible.

RELATED: Maddow On The ‘War On Moms’: “A Huge Big Political Fight In Which Both Sides Agree’

Opening the discussion with the women vote, Maddow noted generally that the media has a problem with covering policy. “We cover these candidates so much as personalities,” she noted, and “underappreciated thing about the gap among women voters and their political preferences right now is policy.”

Asked whether there should be a line the media refuses to cross with candidates, Maddow agreed that families were it, with the caveat that “unless people are campaigning on policy that they want to pursue for the nation that’s based on their superior family values… unless there’s a hypocrisy issue there, I don’t care.” The problem for the media, however, was that “the candidates keep putting their families on the political stage.” While Maddow objected to the media “covering the families as a political factor… they keep introducing their families as if they had political salience.” She argued that politicians can’t say “this is my family, this is how I interact with my family, and also don’t report on my family.”

While she admitted openly to being a liberal, Maddow argued she was not a “partisan,” and that it was possible “to say what your opinion is about the world [and] not impede your ability to convey the facts of what is going on in the world.”