Maddow Mercilessly Mocks GOP Disarray: Will We Just Not Have a Speaker Now?
video

Maddow Mercilessly Mocks GOP Disarray: Will We Just Not Have a Speaker Now? 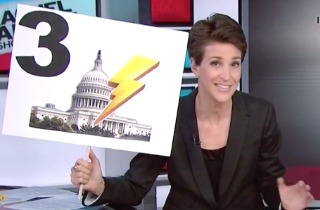 Rachel Maddow brought out a bunch of props tonight to mock Republicans over the frantic scramble to select a new Speaker of the House after Kevin McCarthy dropped out.

She first brought up the remarkable irony of John Boehner joking a few days ago, “I had this terrible nightmare last night that I was trying to get out and I couldn’t get out. And a hand came reaching, pulling me.”

Maddow suggested that since none of the remaining candidates may be able to get 218 votes and the chances of conservatives compromising is low, she suggested either Nancy Reagan or Ted Cruz or the Duck Dynasty guy or even returning champion Newt Gingrich because apparently that’s a thing now.

But then she warned about the “ominous” option: what if there isn’t anyone who’s able to get 218 votes? Well, “there could just be no Speaker!” And as Maddow explained, that would mean absolutely nothing gets done and “Congress just closes.”

However, there’s one small other thing that could happen: “John Boehner is not allowed to quit.” Maddow said it would be “freaking amazing” if Boehner is forced to stay as Speaker, because then, well…

“It would be truly a nightmare for this group of Republican hardliners––who just claimed Kevin McCarthy’s scalp… and they just killed John Boehner’s tenure as Speaker––if the ultimate result of all of this is that John Boehner not only can’t quit, but he can’t be fired, they can’t get rid of him!”