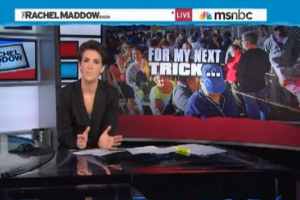 “Things people are saying about the election that are not true, but it makes them feel better to say it anyway.” That’s what Rachel Maddow devoted a segment to on her show Tuesday night. While Maddow said she understood the temptation to tell such “happy tales,” she recommended a healthy dose of reality.

First up was Paul Ryan — who pointed to high voter turnout in “urban areas,” which he said gave the president a big advantage. Maddow begged to differ, noting NBC News’ report that, in swing states, President Barack Obama did as well as as Democrats usually do in urban areas. He did well, but “par for the course.”

Next: Mitt Romney in 2012 versus John McCain in 2008. There’s been “a fair amount of bipartisan anti-Mitt Romney glee over the idea that Mr. Romney received even fewer votes for president than John McCain did back in 2008,” Maddow said. But while this may have seem true on election night or shortly after, it’s not actually true. With all the vote counting finally finished, Maddow said, it’s evident that Romney did receive more votes than McCain.

And round three: The man behind the “Unskewed Polls” website, Dean Chambers. The site became famous for being “hilariously wrong about polling in the presidential race,” Maddow said. Now it’s reincarnated as “Barack O’Fraudo,” a website about voter fraud, which argues that Obama “stole” the election. Particularly in Ohio, Pennsylvania and Florida.

“I would try to explain how the president supposedly stole those states with voter fraud,” Maddow said, “but I don’t speak crazy.”

“Telling yourself things about politics to make yourself feel good feels good,” she concluded. “I understand why people are tempted to do this, but it doesn’t mean we shouldn’t contrast those happy tales that make us feel good with the the facts of what actually happened. So we can learn from them.”