Maddow: Newt Gingrich ‘Will Tell You… Whatever Will Motivate You To Buy His Books’ 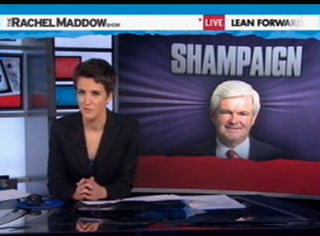 With Newt Gingrich now the Republican frontrunner, Rachel Maddow took the opportunity to revisit his campaign and see what has changed since his campaign staffers resigned en masse last July. Maddow found that not all that much was different, at least in terms of campaign goals– or at least the one specific goal of selling books and DVDs.

Joking that it appeared Gingrich had “inadvertently surpassed” Herman Cain and Mitt Romney in the polls– a 13 point surge since June– Maddow noted that many would consider it a “slap in the face to those who thought Gingrich was out to sell his books and DVDs,” except a third of Gingrich’s upcoming events, she noted, were still book and film stops. That, she argued, is because “running for President is a great way of selling your stuff,” as it “sort of gives you a justification to talk about yourself in rather grandiose terms.” And does Newt Gingrich ever talk about himself in grandiose ways, Maddow argued, citing a quote of him stating, “people like me are what stands between us and Auschwitz.”

Maddow went on to explain his claims of wanting to be an environmentalist and zoologist, while also having decided on politics at age 15. “Do you want to vote for a man like this for President?” Maddow asked cheekily. “Well, what about buying one of his books?” She concluded, “Newt Gingrich will tell you whatever story you’d like to hear about you, whatever will motivate you to most buy his books and DVDs.”