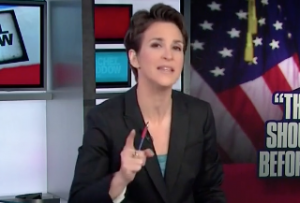 One of the odd things about the “Bridgegate” scandal is how despite the assumption lanes on the George Washington Bridge were closed as revenge for the Fort Lee mayor’s refusal to endorse Christie, both Christie and that mayor have cast enough doubt on this story to make Rachel Maddow revisit the question. And she discovered a possible new explanation for why they would have engaged in that kind of retribution in the first place.

The e-mail sent by Christie aide Bridget Kelly to the Port Authority executive behind the lane closures was dated August 13th, 2013, “the order to unleash hell on Fort Lee.” And Maddow believed Christie “very convincingly quashed” the idea that this was because of a refusal to endorse, but connected the dots to suggest another motivation.

So when a Republican member of the New Jersey Supreme Court came up for reappointment last year, NJ Senate Democrats promised to make it a brutal fight, so Christie decided to stop the reappointment. He was furious at Senate Democrats, and held a press conference getting really angry with them.

That press conference, expressing much anger with Senate Democrats, was held on August 12, 2013, a day before the Bridgegate e-mail was sent. And Fort Lee, the town that got backed up, is part of the legislative district represented by Loretta Weinberg. The leader of the Senate Democrats.

Maddow concluded, “Until someone who knows the actual truth about this speaks, it remains a wide-open question.”