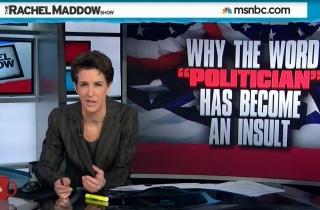 MSNBC host Rachel Maddow tore into the scandal-plagued Democratic Party of California on Wednesday night. She noted that the Golden State is dominated by Democrats and, while the state’s GOP is probably “beyond reviving,” the impression that the Democratic Party is corrupt at the state level has the potential to bring it back.

Maddow began by reporting that a series of raids were conducted across Northern California on Wednesday in which a variety of politicians were arrested. The arrest of Sen. Leland Yee (D-San Francisco) on gun trafficking and bribery charges made him the third Democratic lawmaker in state government currently facing a criminal investigation.

She said that the arrest of Democratic politicians in California coincides with arrests of Democratic elected officials in Rhode Island and North Carolina. She noted that none of these Democrats are federal or statewide officials. “But still,” she said, “today was basically Democratic catch-up day on the reasons why the word ‘politician’ has become an insult in our country.”